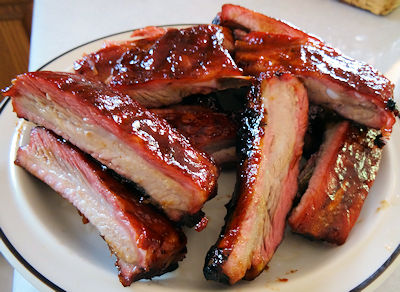 I preheated my Louisiana Grills pellet smoker to 230 F with apple pellets.

I took the silverskin off the back of some spareribs by grasping it with a paper towel and pulling. Then I gave it a generous rub with Louisiana Grills Sweet Rib Rub.

I put the ribs on and sprayed them with apple juice every hour or so.

I had the intention to smoke them to an internal temperature of 195 F. I put the probe from my BlueTherm Duo in the ribs and took them to 195. This took about 5 hours. Normally, I check a couple of times with my Thermapen, particularly in thin cuts like ribs with lots of bones as there can be hot and cold spots. For some reason, I didn’t this time. Laziness? Stupidity? Who knows.

When I went to brush the ribs, I noted the probe had worked closer to the surface. On checking the internal temperature, it was only 180 F. Sigh. We had already prepared our sides, etc.

All was not lost. She Who Must Be Obeyed likes her ribs chewy and I like them fall off the bone. The 195 F internal temperature gives us a compromise, bite of the bone. At 180 F, the ribs would be exactly where the missus likes them. So she was happy.

Learn from my mistake. When cooking ribs or small cuts of chicken, or, heck, anything, double check the internal temperature in a couple of different places.

Anyway, I brushed the ribs with a nice layer of Rufus Teague Whiskey Maple Barbecue Sauce. I smoked for 20 minutes and gave it a second brushing and smoked for a final 20 minutes. 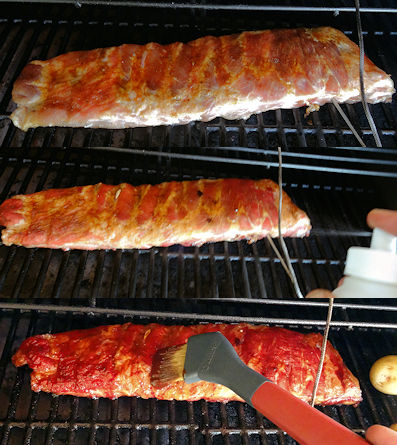 I let the ribs sit for a while and cut into single ribs to serve.

This barbecue sauce was very good as a mop sauce. So, I was surprised it was an excellent glaze as well. The sweetness from the Maple doesn’t become overpowering as it cooks on and the spicy complex flavours just concentrated into a sweet/spicy bit of heaven.

Once again, I thank Mr. Teague for making a tasty wonderful product I am proud to serve to my family and guests.