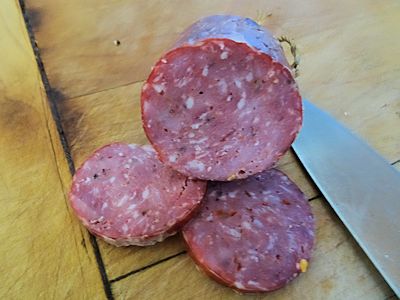 This is the second part of my first attempt at making sausage on my Louisiana Grills Pellet Smoker. In the prior post I showed the way I made Smokehouse Summer Sausage. I made this bologna at the same time using a mix from LEM products called Backwoods Trail Bologna. I bought the kit version that includes the sausage casings.

I made sure the meat was cold. It is important to keep the meat cold throughout the process. It grinds better and gives a superior texture to your sausage. I cut the moose and pork up and ran it through my KitchenAid grinder attachment with a small plate. I put it in the fridge to chill for 30 minutes.

This kit has the seasonings, cure and casings. I was worried that the cure was missing but it was in a small envelope inside the envelope containing the seasonings.

You mix the seasonings and the cure with cold water. Then I put the meat on a baking tray and pushed the end of my fingers into the meat to make lots of small holes. I poured the seasoning mixture over the meat and mixed it for 4 minutes by folding one half over to the middle and pressing the meat out. Then I would turn the tray 1/4 of a turn and repeat.

The meat should be a little sticky when you are done.

I put the meat in the refrigerator for 30 minutes to chill.

The kit came with nonedible fibrous casings that allow smoke to permeate. They have to be soaked in hot water before using.

I put them on my LEM stuffer with the largest horn and filled them with the meat mixture.

tied off the open end. and put them in the fridge overnight.

This is not your parents bologna! It has a great texture and a nice smooth heat that builds as you eat eat. There is a great pepper after taste. While it is spicy, it isn’t an uncomfortable burn just a pleasant heat. I love this stuff. 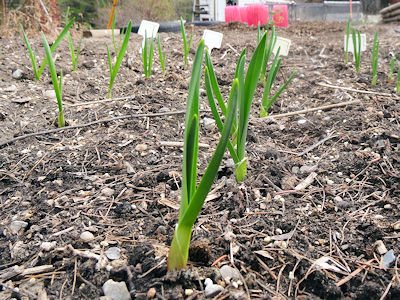