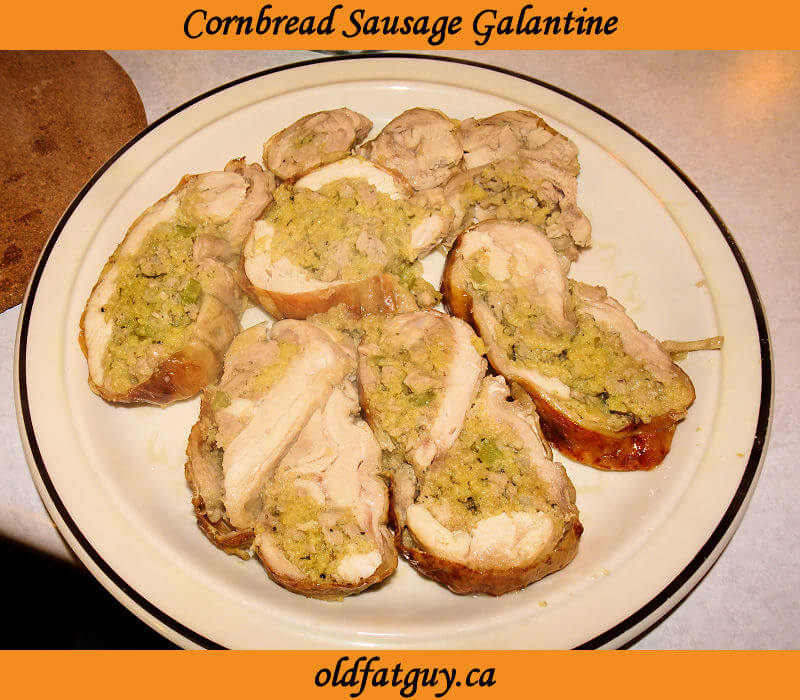 Sometimes you just need to do something fancy. I decided to debone a chicken, stuff the carcass and make a galantine.

Here, I run into a terminology problem. When I took chef’s training more decades ago than I care to admit, a Galantine was a chicken that was boned and stuffed, cooked and then served cold and sliced. A Balantine was a similar dish but was roasted and served hot. It is also spelled Ballotine.

As I did research, most people call any stuffed deboned chicken dish a Galantine whether served hot or cold. Some call a Balantine the chicken thigh deboned and stuffed.

There are a lot of people telling others that a Galantine can only be served cold and vice versa. As usual, consensus in the culinary world can be elusive.

I have gone with the name Galantine because it meets the needs of most groups. This is a deboned, stuffed chicken that is roasted and then sliced and served hot. Hate me if you disagree.

I made a batch of Cornbread Sausage Stuffing to stuff my Galantine.

I deboned a 1.2 to 1.5 kg (2 1/2 to 3 pound) chicken. I took dozens of pictures to illustrate this. I tried giving detailed verbal instructions. However, it just doesn’t cut it. You need a video.

I have found a video by Jacques Pepin that shows you how way more clearly than I can describe. Someday, I will do a video of me doing it but for now, this is an excellent tutorial.

Of course, I saved the carcass and bones for making stock.

I spread the deboned chicken out, skin side down. I pushed stuffing up into the deboned drumsticks and covered the rest of the surface with about 1/2 inch (1.2 cm) of stuffing. You will have stuffing left over. Set it aside and cook it in a uncovered pan while cooking the chicken for about 30 minutes.

Fold the edges of the chicken to the centre to make a cylinder.

Flip the bird over. Cross the stuffed drumsticks. Cut a 3 foot length of butcher string. Tie the drumsticks together leaving a four inch piece of string after the knot.

Flip the bird over and wrap the string around each cross string and tie it to the end left on the drumstick knot.

I know this sounds confusing but, it is shown well in Jacques Pepin’s video as well.

Put the chicken on a rack over a roasting pan in a preheated 375 F (190 C) oven and cook until the internal temperature in the thickest part of the Galantine is 165 F (75 C).

Put the Galantine on a cutting board and tent with foil.

Slowly whisk in 500 ml (2 cups) chicken stock and continue stirring until the sauce is thickened into a nice gravy. Remove from heat.

Cut the tips off the drumsticks and slice the Galantine into 1/2 inch (1.2 cm) slices. 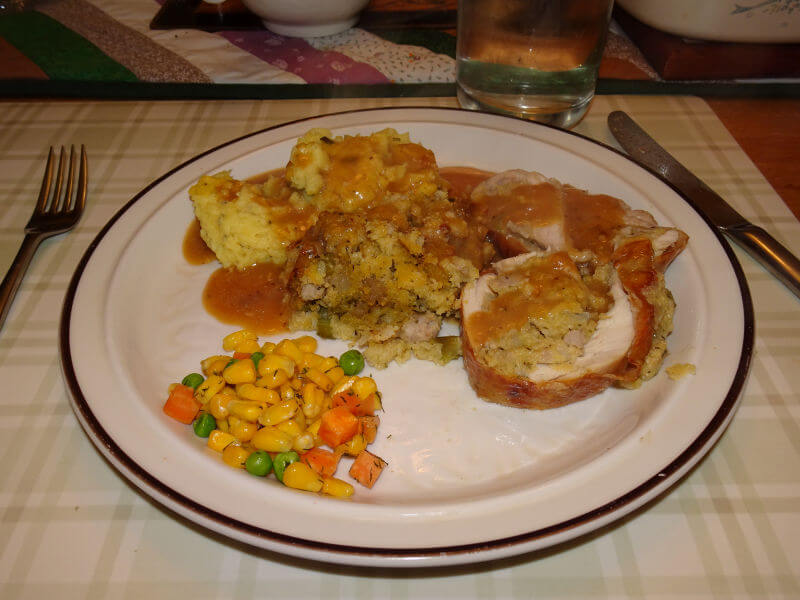 This was absolutely delicious. The chicken was moist, and tender as it was cooked with stuffing. The stuffing had great taste and chew. The combination of the chicken and sausage made an incredibly good gravy.

It also made a nice display on the plate. The stuffing held together well in the slices.

I will be doing more Galantines and will be experimenting with different stuffing.