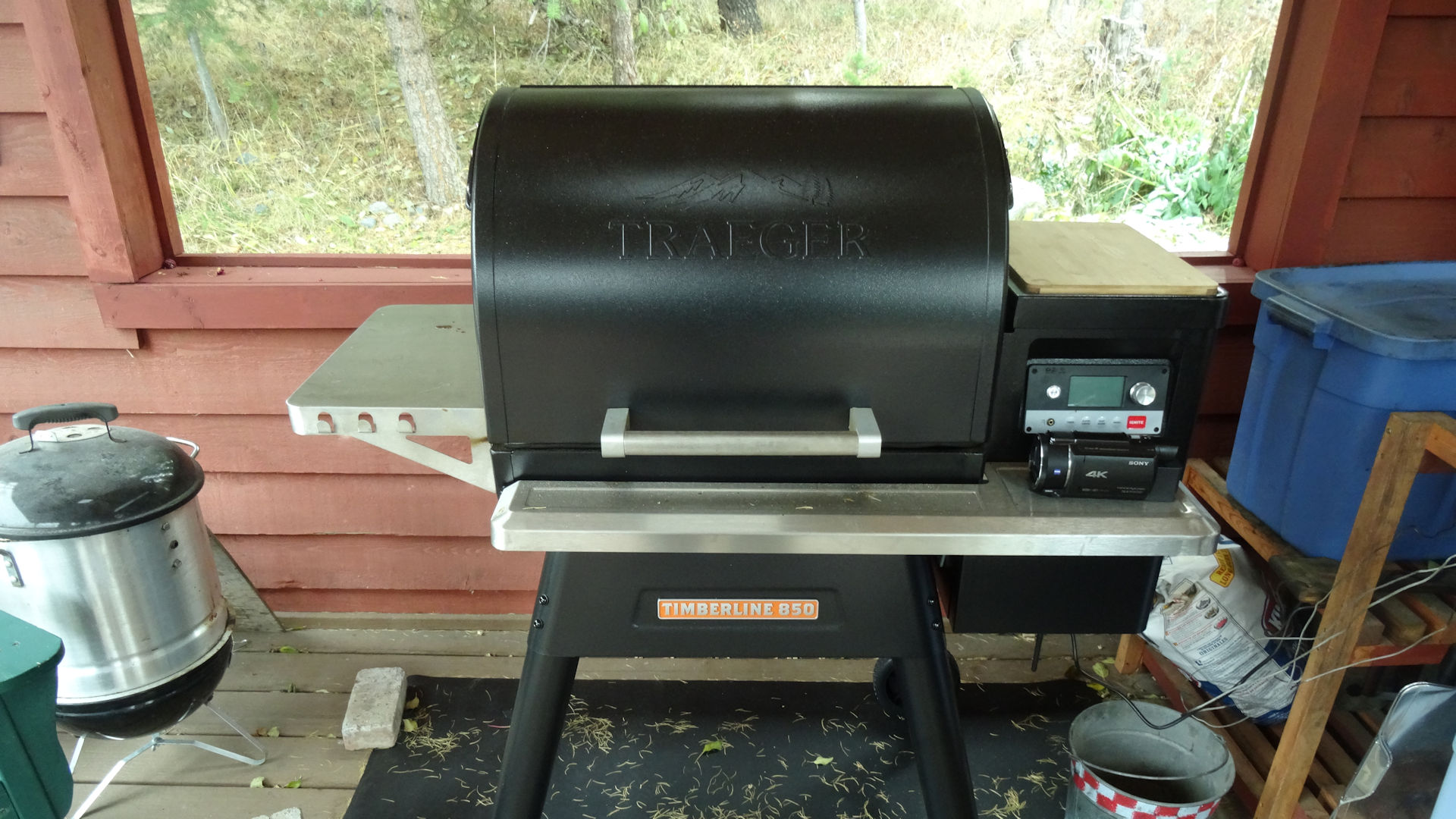 In my prior post, I built my Traeger Timberline Grill. I’ve had it for a couple of weeks and will give you my impressions.

I’ll start by talking about the construction of the grill. It is made of much heavier guage steel than most home smokers. Then they use double wall construction to lend strength and insulation for steadier heat. The paint is not the black stove paint used on most units. It is a heavy enameled paint that should last for a long time. The wheels are heavy duty and come with a locking mechanism. The hinges are heavy duty.

This grill screams that it is heavy duty and built to last.

The hopper is larger than most and will take a full 20 pound bag of pellets. This is a great feature for long smokes. The hopper also has a pellet sensor that lets you know the level of the pellets in the hopper.

I find the pellet sensor isn’t very accurate. It tends to show less pellets than there actually are. However, it could prevent you from running out of pellets in a long cook and I am appreciative of it. 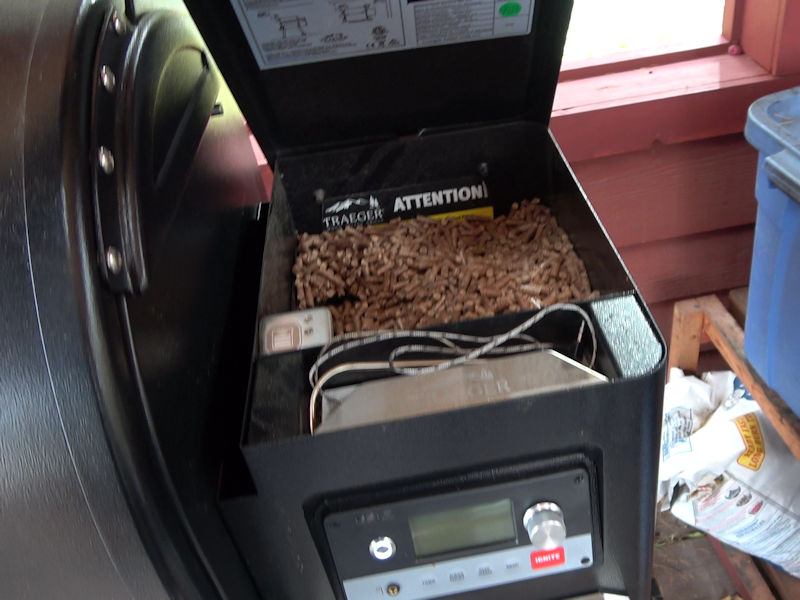 There is a space in the hopper to store the probe that comes with the smoker. The probe plugs into the controller and lets you track the internal temperature of your meat.

There is an unusual feature. A magnetic Bamboo cutting board on the top of the hopper. I have to admit I scoffed at this a bit as I thought it was just a gimmick. However, in the weeks I have had the smoker, the cutting board turns the hopper into another convenient shelf and I have use the cutting board a couple of times. Sorry Traeger! You were right. It is a good idea. 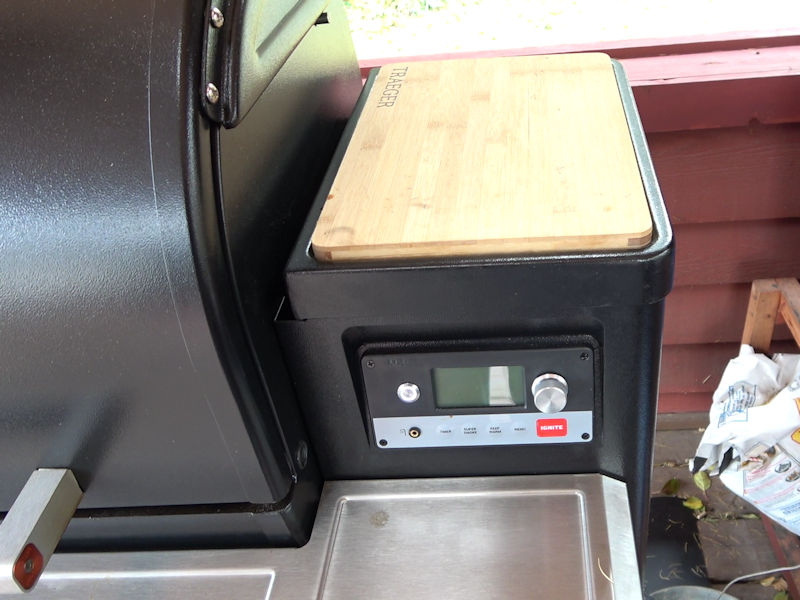 There are two shelves. Both are heavy grade steel and solid. The side shelf has hooks for accessories and is a good size. There is a long thin shelf along the front. There is room in front of the control panel for some sauce or something but the thin part under the handle is kind of useless.

When you open the unit, you will see the double wall construction. The internal walls are stainless steel and I have found it easy to clean grease and splatters off of it. You will note there is a thermal gasket around the door which should further help insulate the chamber.

The grills are very heavy stainless steel. There are three of them that give a lot of cooking area. They can get away with putting three shelves in because they made the chamber egg shaped and tall. This means that this smoker has more cooking area than my previous one while being a foot shorter. It also means you can cook tall items like beer can chicken and large turkeys.

The bottom grill has two positions. One for smoking and another on the bottom of the chamber for grilling steaks and burgers. It also pulls out part way to allow you to turn or brush items on it. 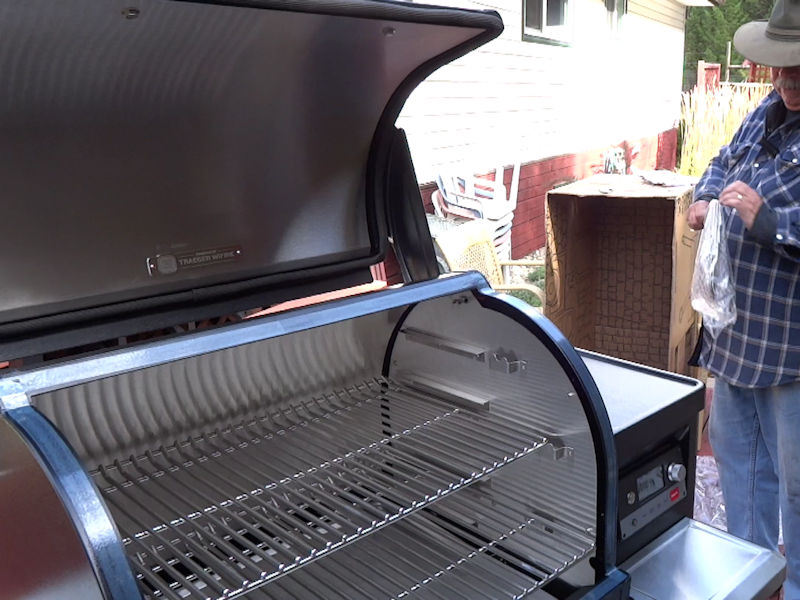 There is a channel along the front of the grill that catches grease off the heat deflector and channels it to an integral grease trap. This is vastly superior to the bucket hanging below a hole on cheaper units. You won’t be bumping it and spilling grease.

The control panel of the smoker is intuitive and easy to use. You adjust temperature or choose a menu item by turning a dial and then pushing it. You can:

There are also two dedicated buttons for Super Smoke (the unit will produce more smoke at lower temperatures) and Keep Warm (the smoker resets to 165 F to keep your food warm).

The control panel will even remind you to clean your smoker.

My only complaint with the controls is that some menus have several layers. If you need to make a change on an item on the third level, you have to hit “back” again and again to get to the main menu. A “home” button would be helpful. 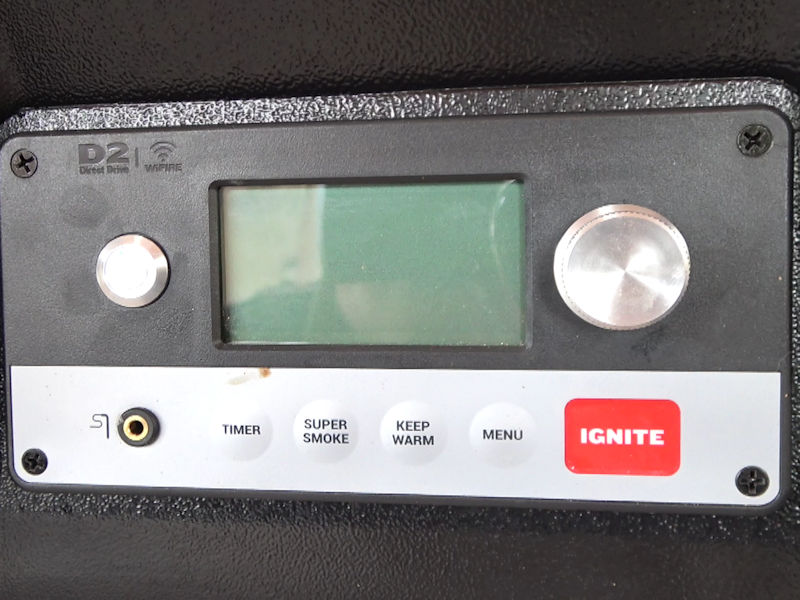 One of the main features of the Timberline is Wifire which is the Traeger term for their wifi connectivity. You can connect the smoker to your Android or Apple phone. You download their software. It has simple instructions for registering with Traeger, connecting to your network and using a QVC code to connect to your phone. It was remarkably easy.

The software lets you:

You can do all of this from anywhere that has a wifi connection.

There is another feature of the software. It gives you access to all the recipes on traegergrills.com and you can select a recipe and then download the cook settings directly to the grill.

The only improvement I would like is a graphing function in the software to allow me to track my cooks. 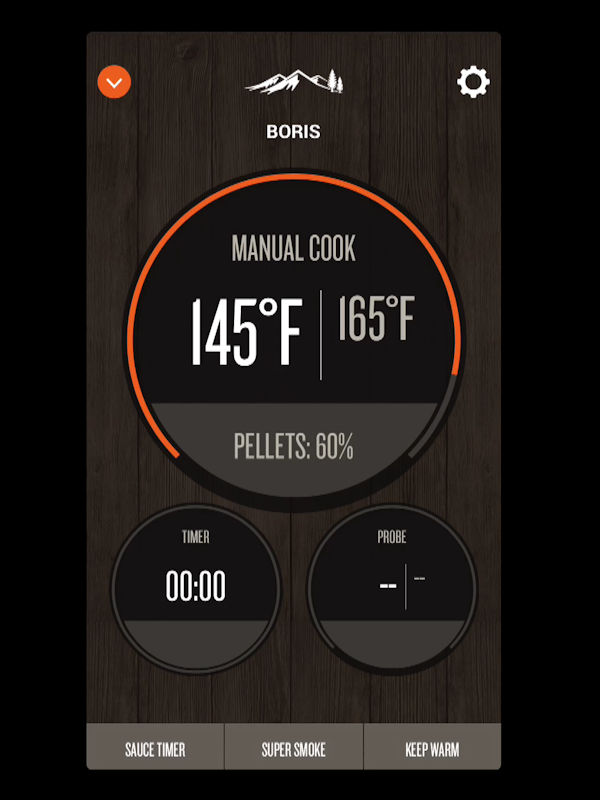 As you can see, this smoker has lots of bells and whistles. There are other small features like a light in the hopper and a dedicated slot for storing the probe. However, all of these details are meaningless if the smoker doesn’t cook well.

For me, the main measure of a smoker is how well it maintains temperature. To accomplish this, the Timberline uses several features.

First, the double wall construction and the thermal seal around the door help insulate the chamber making it less impacted by outside temperatures and wind.

Second, they have used a DC direct drive fan and auger motor. This allows for varying speeds that make temperature control more accurate.

Third, they claim to have a TurboTemp feature that reheats the grill faster after opening the door.

As I will show later in this review, these result in steadier temperatures that recover faster after opening the grill. I haven’t done a measure yet but I believe the unit also uses less pellets than my prior smoker due to these.

I decided to test the temperature control by using my Thermoworks wireless remote thermometer.

My first test was to track the temperature in different locations in the cooking chamber. There were warmer and cooler spots but only with about a 10 F variance. That is excellent! If you don’t believe me, try it with your oven and you will be lucky to be that consistent.

My next test was a smoke at 165 F. If you are going to be cooking cured sausage, you need consistent low temperatures. My last smoke wouldn’t go below 180 F and would spike way higher than that. 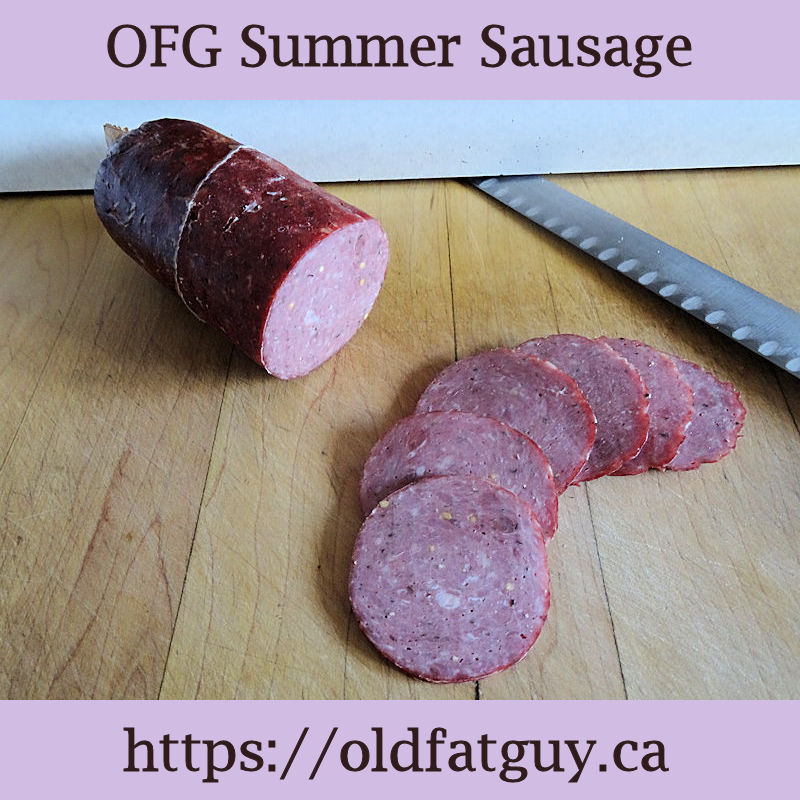 Here is a graph of the first part of the smoke showing how consistently it held temperature.The dip is when I opened the door. 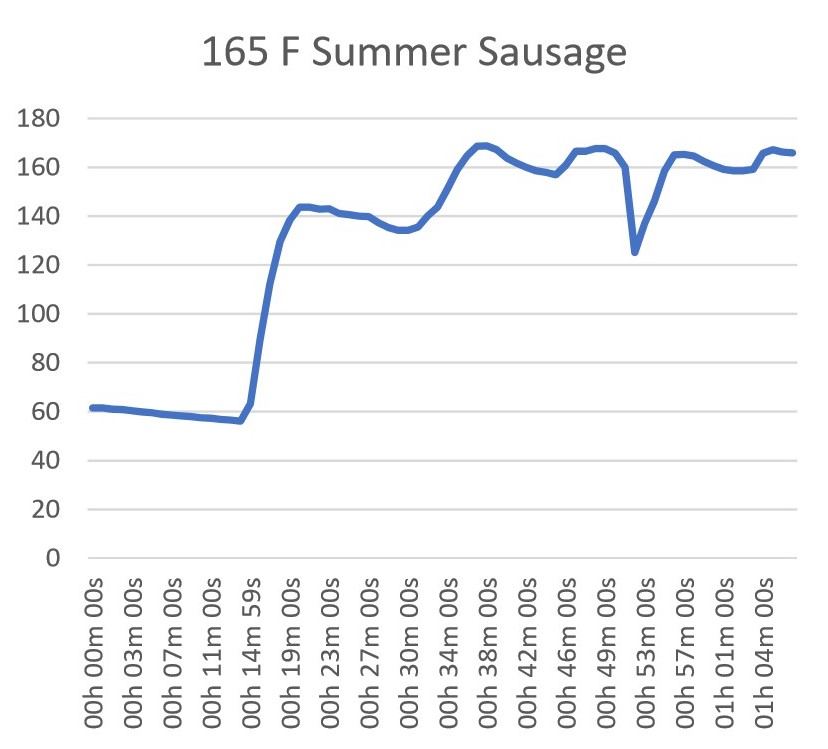 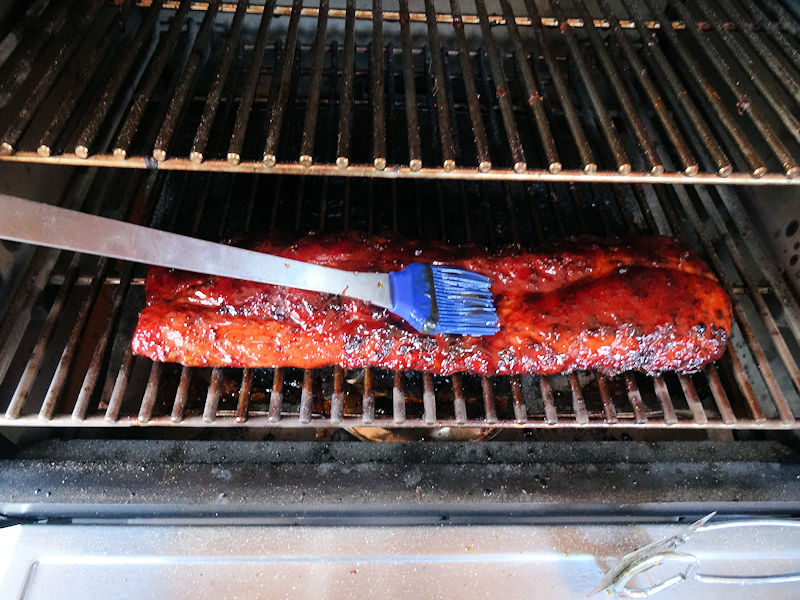 Here is the graph of the cook. You can see how steady the temperature is with the only drops when I opened the door. 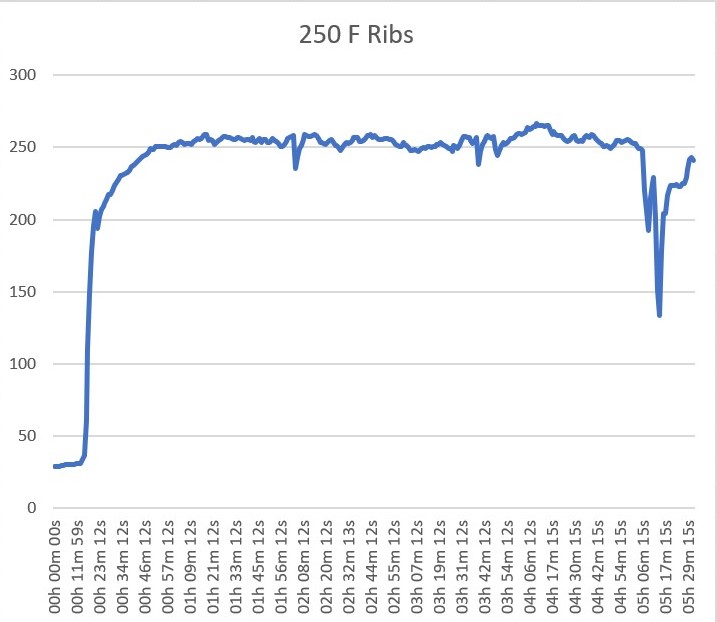 The third cook was at 350 F for some chicken drumsticks.

It looks like the grill was cooking a little below temperature. However, my probe was on a rack under the drumsticks which were on a smoking tray. Any oven or smoker is a little cooler under a tray. The unit actually kept temperature well, even under the tray. Again, The drops in temperature were when I opened the door. 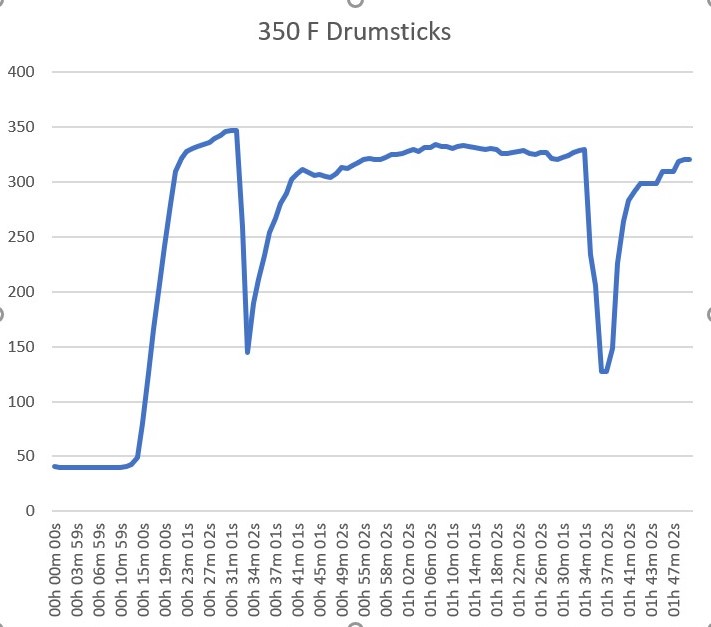 The fourth cook was Greek chicken over potatoes. 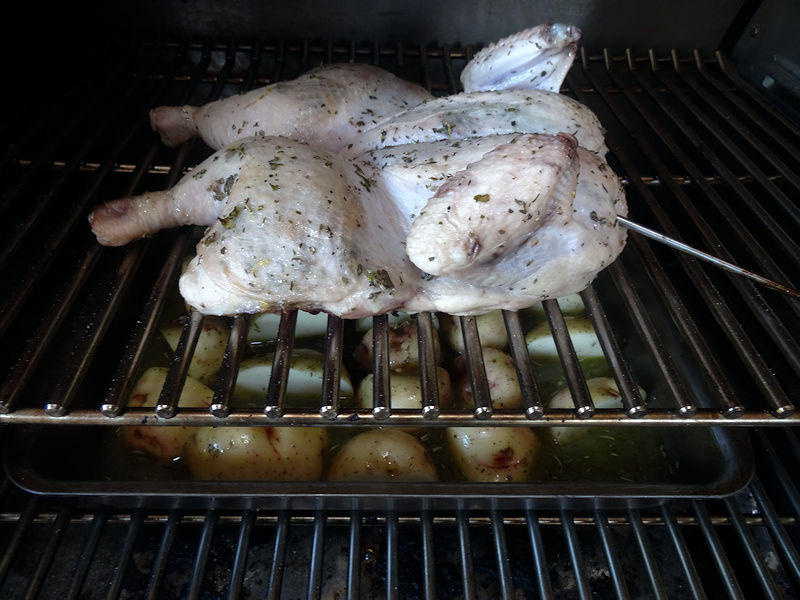 The chicken was cooked at 350 F and then I kicked up the heat to 450 F to finish the potatoes. You can see how quickly the unit came up to 450 F. 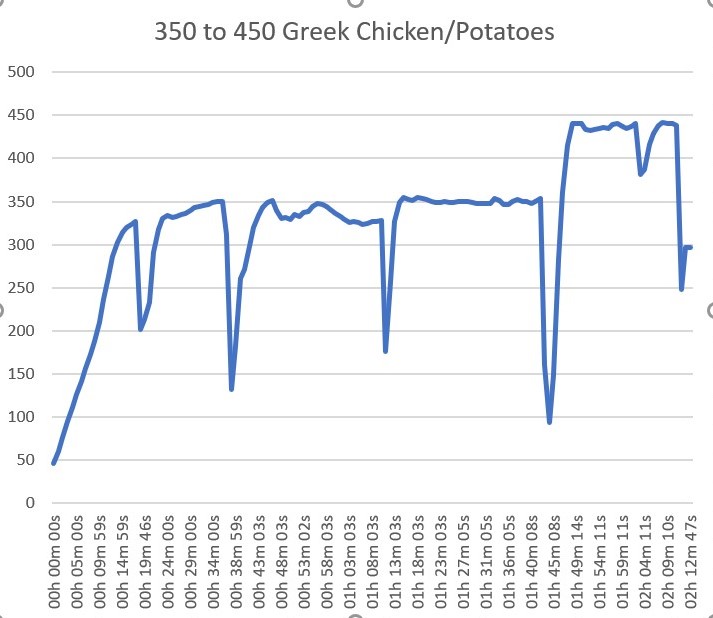 The last smoke was steaks. 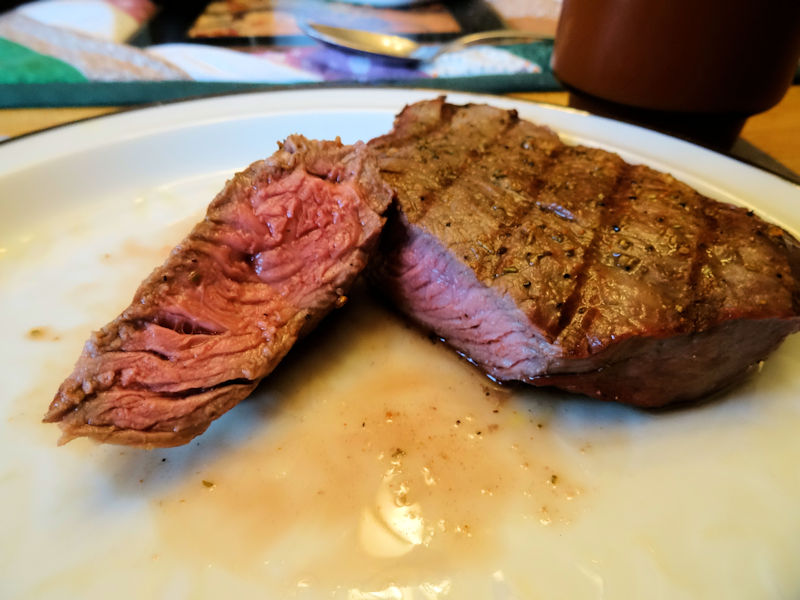 Traeger claims you can sear a steak with their smoker. I lowered the bottom grill to the lower position. I fired it up to 500 F. I let it run to heat up the grill. I cooked the steaks. As you can see, I got grill marks but they weren’t really what I call seared. She Who Must Be Obeyed says they were moist, tender and delicious but I like some more sear for appearance. I may still have to reverse sear.

That being said, the unti got to 500 F and recovered quickly when I opened the door to turn. 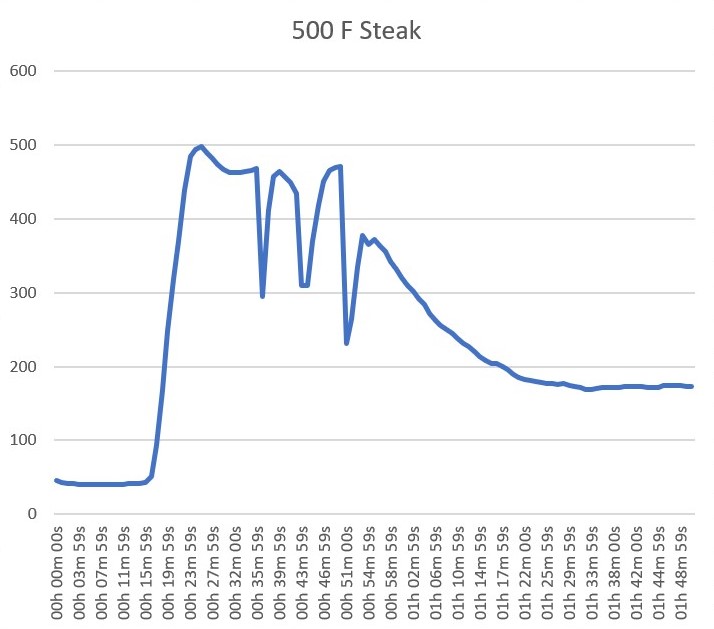 I was so pleased by the temperature control of the Timberline. Having this reliable temperature settings makes smoking, grilling and even baking easier.

The next most important thing from a smoker is how does the food taste. The Traeger does not give heavy smoke like most pellet smokers. However, it has more than enough at lower temperatures. The Summer Sausage had nice smoke flavour and check out the smoke ring from these ribs! 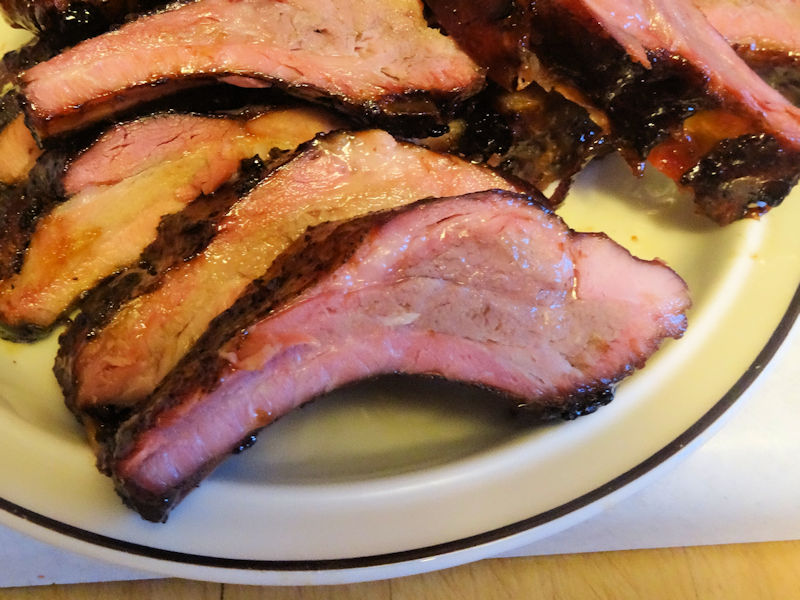 I am ecstatic. I like the Wifire, cutting board, grease control system etc. However, I love the consistent temperatures and great flavour more. This is a quality smoker that is built well and makes great food. I love it.

I have done a video of the review if you prefer not to read!