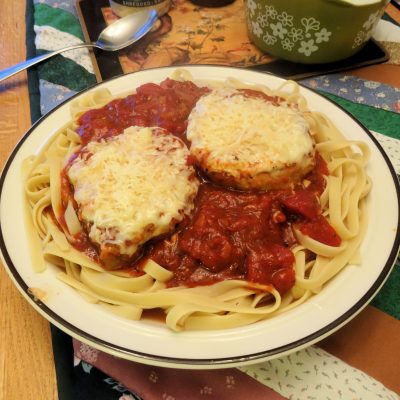 I had been shovelling snow and was really tired. I could have picked up a burger, ordered a pizza or opened a can. Instead I made Pork Chops Parmigiana. This recipe is so easy, even I can do it.

I started by heating two teaspoons of vegetable oil in a fry pan over medium heat until it just starts to smoke. I browned two pork chops in the frying pan, about 3 minutes a side.

I added 2 cups of Marinara Sauce. You can use home made or commercial jarred sauce but I recommend home made.

I brought the sauce to a boil, reduce the heat and covered the fry pan to simmer for 15 minutes.

While the pork chops were simmering, I cooked 150 grams (6 ounces) of fettuccine per package instructions.

After the pork had simmered for 15 minutes, I made sure the internal temperature was over 165 F. I put 50 ml (1/4 cup) shredded mozzarella on each of the pork chops and put the lid back on.

I drained the pasta and spread it on a serving plate. I temporarily put the pork chops on a plate.

I poured the marinara sauce over the fettuccine and put the pork chops on top of the sauce and served.

I made a video of this recipe.

This was so easy and it tastes to good. Cooking the pork chops in the sauce makes them moist and gives them a nice flavour. The cheese makes it seem fancy and who doesn’t love pasta and marinara sauce?

The next time you want an easy meal, try this one!