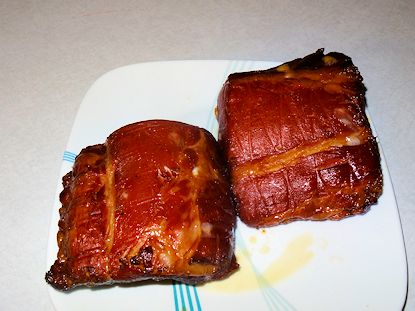 I have been making my own back bacon (Americans call it Canadian bacon) for a while now. It has been great and I really enjoy it.

Second, the ways I tried to get maple flavour just didn’t add enough. When you make bacon, you have to cure pork by putting a dry cure on it or by immersing it in a curing brine. I tried putting maple in both dry cures and curing brines. No matter how much I put in, it never really picked up a maple flavour. This time I tried injecting a maple/brine mixture before brining the pork.

I purchased a couple of boneless 1 kilgoram (2 pound) pork loin roasts to make my bacon.

First I made a curing brine. My curing brine is based on a recipe from Pops on the Smoking Meat Forums. His brine recipe can be found at this link:

I modified it to meet my goal of making a maple bacon. Here is my recipe to make 3 litres (3/4 gallon) of brine which is the amount I needed to cover the pork loins I had. When brining pork, you need enough brine to cover the meat. It is critical you get the right amount of Prague Powder #1 (also known as I nstacure #1 or pink salt) to the amount of water. Use 15 ml (1 tablespoon) Prague Powder per 4 litres (1 US gallon). If you add too much curing agent, it can make you sick. Too little and you run the risk of toxin creating bacteria growing in your bacon.

Mix all until dissolved.

I took 125 ml (1/2 cup) of the brine and added 60 ml (1/4 cup maple syrup to it and injected it in several places in the pork loins I had purchased. Then I put the pork in a stainless steel pot and poured the brine over it. Put a plate or a plastic bag full of brine on top of the pork to keep it submerged. Cover the pot and put it in the fridge for two weeks. I turn it every few days. 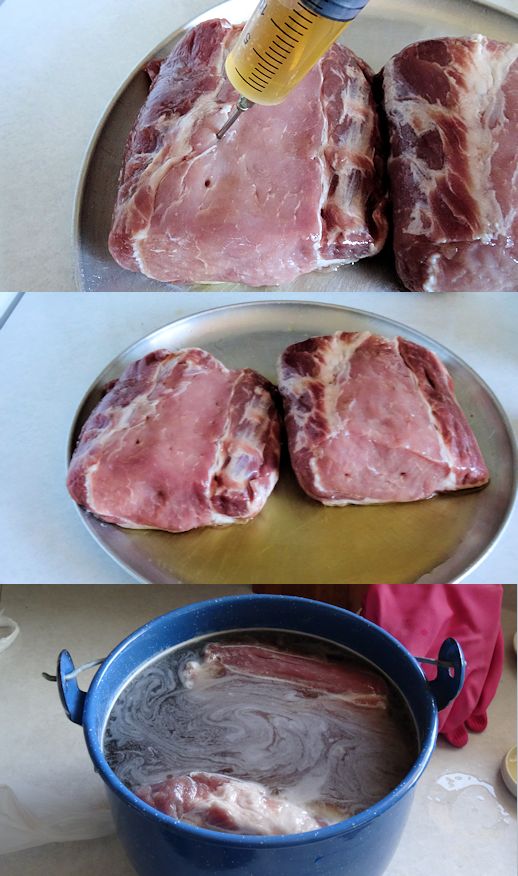 After two weeks, take the pork out of the brine. Rinse it and dry it with a paper towel. Then I put it in my Bradley electric smoker set at 140 F with no smoke for 2 hours. This is to dry the surface so the smoke will adhere well.

I wanted a strong smoke flavour so I decided to cold smoke the bacon for a few hours. I put the strainer in the bottom of the pot of my WSM Mini and then put a wire ring on it. I put a foil covered ceramic plate on the ring and filled it with ice to keep the temperature down. This isn’t really necessary for doing the bacon but I was going to smoke some cheese at the same time and that requires cool smoking temperatures. I used my Amaze-N Smoker with a mix of pecan and apple sawdust and put it on the coal tray of the smoker. I put the pot on it, covered the smoker and let it go for 3 hours. You can see the cheese I did at the same time. 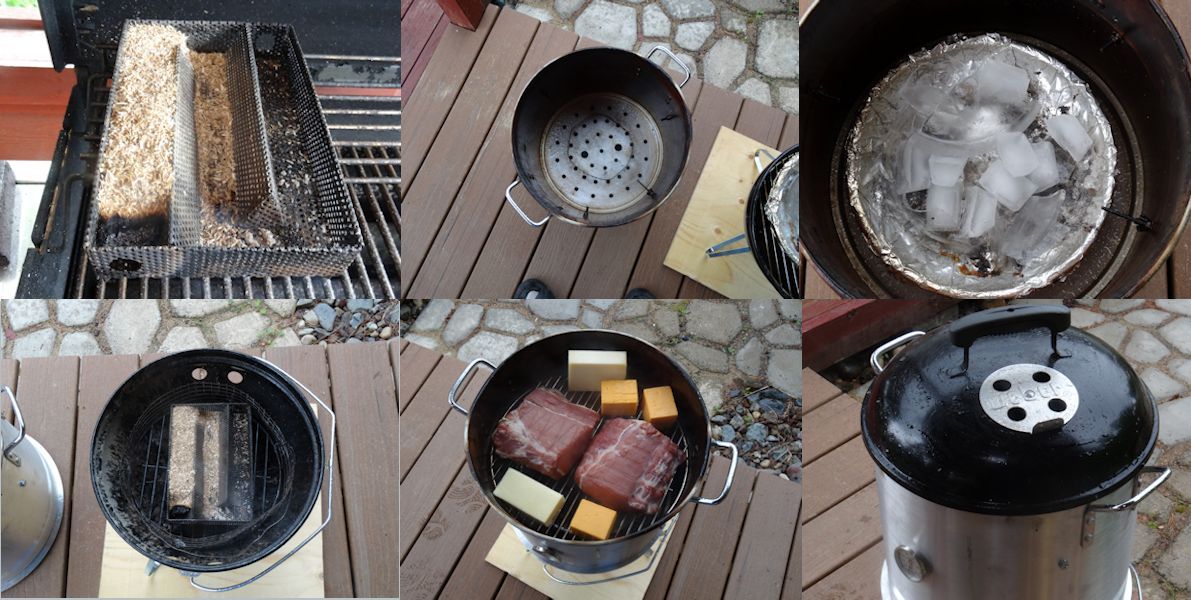 I let the bacon sit in the fridge for 2 days for the flavours to blend. Then, it is sliced. I’m sorry, I forgot to take a picture when I sliced it two days later.

The Verdict: Eureka! This has a real nice taste of maple. Not the candy maple taste of commercial products, a real nice mellow maple flavour. This is now my favourite recipe for back bacon.

2 thoughts on “Maple (Back) Canadian Bacon”