This is a recipe that was inspired by several postings on Smoking Meat Forums. It is spareribs  cured like bacon and glazed like ham to make Bacon On A Stick. It has the great texture of ribs, the wonderful taste of bacon and the sweet crust of ham. Who could ask for more! Well, actually, everyone asks for more of these.

It uses regular spareribs and cures them like you would ham or bacon. The ribs are cured by putting them in a brine recipe that includes curing salts. These are also known as pink salt, Instacure 1, Prague Powder 1 and several other names. The main thing is to make sure it is 93.75% salt and 6.25% sodium nitrite. Too much or too little is bad for your health so use the exact amount in the recipe.

I posted a detailed process of how I prepared these in Smoking Meat Forums and the link is:

I used a smoker but you could make this in the oven and get almost as good a result. Just put the ribs in the oven at the temperatures noted in the recipe instead of the smoker.

You have to try these. They are sweet, salty, tender and just so good. Make sure you let your guests know they are pink like ham because they are cured and not because they are under cooked and enjoy! 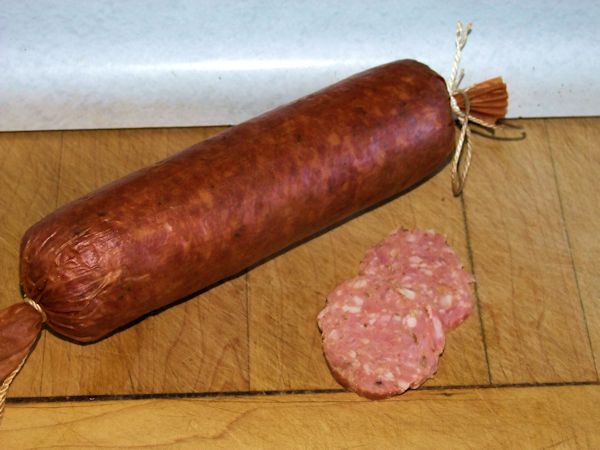 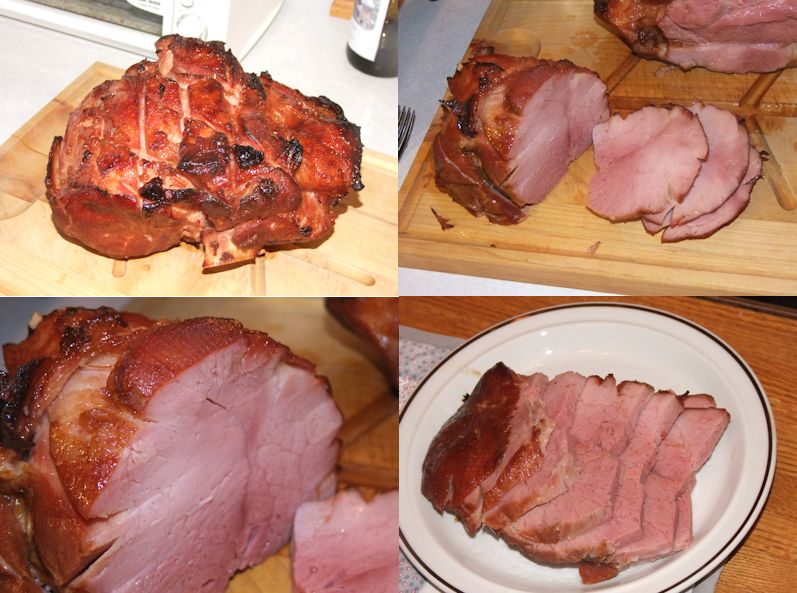 This dish is not technically a ham. A ham comes from the shank portion. However it tastes, looks and cooks like a ham.

I was in the supermarket and they had an uncooked smoked pork shoulder on sale for a really good price. Normally, they are obscenely expensive but then they will go on sale for an
incredible price. I think it is because most people don’t know what to do with them.

I had intended to smoke it as I have never done one in the smoker before. However, She Who Must Be Obeyed wanted me to make it this way. She has the ability to persuade so I did so.

I really like this recipe and I highly recommend it. However, it must be served with scalloped potatoes (I will post my method for making them tomorrow). I don’t make the rules, I just follow them.

We had a birthday this month. I took the opportunity to smoke my first turkey dinner. I posted my efforts in Smoking Meat Forums. The link is:

The turkey came out moister than regular roasting and the skin was wonderful. I really liked the texture and taste of the turkey. I tried an experiment using some of the rendered fat to make a roux for the gravy. It had a nice smoky flavour but She Who Must Be Obeyed prefers regular gravy. The problem with that is that there are way less drippings so any gravy would have to be made from stock.

In total, smoking makes a great turkey but not as nice a gravy as regular roasting.

I will likely use this method in the summer to avoid heating the house up.

I suggest you give it a try if you have a smoker!

When I retired, I purchased a Bradley Smoker. I have really enjoyed it. As I got used to using it, I had to try my hand at Montreal Smoked Meat. I love going to Schwartz’s when I go to Montreal and what they call Montreal Smoked Meat in the supermarket is not even close.

The problem is that Montreal Smoked Meat is made out of brisket and is quite fatty. So I tried making some out of outside round beef. It turned out great! I posted how I did this on Smoking Meat Forums and the link is:

It looks like a lot of work but it is actually just a few steps spread over a couple of weeks. The only thing you have to be very careful about is the use of the curing agent, in this case Morton’s Tender Quick. You have to make sure you use 15 grams (1/2 ounce) per 500 grams (1 pound) of meat. Not enough cure and it will go bad. Too much and the curing agent can harm you. It is no problem if you follow the instructions.

This is wonderful. It has the peppery taste of Montreal Smoked Meat without the sweetness of pastrami. This version is quite low fat and has a lot less salt than commercial smoked meats. Even She Who Must Be Obeyed likes this.