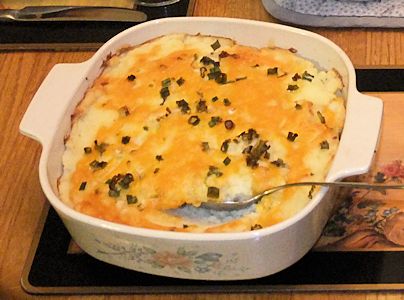 We found this recipe in Canadian Living Magazine. It makes a great mashed potato. However, the main reason it became a tradition in our holiday dinners was because it could be made the  day before. It is so nice to just put a pre-made casserole in the oven while the hustle and bustle of making a turkey dinner ensues.
Canadian Living has posted the recipe at the following link:

I start by weighing out my potatoes, peeling them and cutting them into chunks. The recipe calls for Yukon Gold potatoes but I actually like the texture from plain old russet baking potatoes better. I’m sure the fact they are also cheaper at this time of year has nothing to do with it.

While the potatoes are cooking, I get all the ingredients prepared to mash into the potatoes. I measure the milk, beat the egg, chop the green onions and portion out the butter and cream
cheese.

The recipe says it takes 20 minutes to cook the potatoes but it always takes over 30 minutes (likely due to my altitude) for me to cook them. I find it is really important to cook them until really soft to get a nice casserole consistency.

When the potatoes are cooked I drain off the water. I save the potato water for gravy and turkey soup I will be making over the next couple of days. Toss in the milk, butter, cream cheese, green onion, egg, salt and pepper and mash thoroughly.

I usually don’t have a huge crowd at holiday dinners any more so I split the potatoes into a casserole and a foil pan. I freeze the foil pan for future use. Just thaw it in the fridge overnight and cook it.

I sprinkle the cheddar cheese and green onions on top. I foil the casserole to be frozen and put it in the freezer. The one I will be serving is covered and goes in the fridge until tomorrow’s feast

The recipe calls for baking at 55 minutes at 375 F. As I usually have a turkey in the oven at 350 F for the beginning of the cooking time, I allow 70 minutes at 350 F and check to make sure the centre is hot.

Good mashed potatoes that I don’t have to fuss with the day of the meal? Say no more.