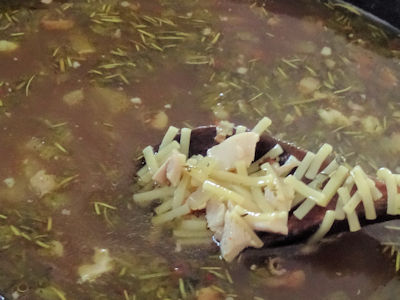 I love to curl and my local club was hosting the Provincial Masters Bonspiel for curlers over 60. I really like our club and volunteered to supply some soup for one of the lunches. I did three kinds. Can you guess what my next three posts will be? I knew you could.

The first post is my Chicken Noodle Soup. I love chicken noodle soup. It is what my mother would give me when I was sick. However, that was the canned stuff and now I think it tastes like salty water with noodles in it. I can do much better.

I bought 4 large chicken legs. I used this cut because dark meat makes better soup in my opinion. The fact that it is a cheaper cut of chicken has nothing to do with it. By the way, the cheque is in the mail.

I put the chicken in a large pot with 1/2 large onion cut into chunks. You don’t kneed to peel it, just wash it well. I also added 1 stalk celery cut into chunks and 3 cloves garlic cut in half. You don’t have to peel the garlic either. I covered these with water and added 5 ml (1 teaspoon) each dried rosemary and thyme.

I brought it to a boil and reduced the heat and simmered for 1 hour.

I took the chicken out and put the remaining pot contents in a 5 quart slow cooker set on low. I put a couple of chicken bones I had trimmed from a prior cook and frozen. I just wanted to use them up, you don’t need to have extra bones to make this recipe.

I took the skin off the legs and cut the meat off the bones. I cubed the meat to 1/4 inch and put it in the fridge. I added the bones and skin to the slow cooker. I let the bones cook in the slow cooker at low for 18 hours.

I diced 125 ml (1/2 cup) bacon, 1/2 large onion and 1 celery stalk. I put 15 ml (1 tablespoon) of oil in the bottom of a large pot and heated it over medium heat. I added the bacon, onions and celery and sautéed until the vegetables were soft and there was some brown bits on the bottom of the pot, about 5 minutes. I removed the pot from the heat.

I strained the stock from the slow cooker and defatted it by putting it in a clear measuring cup and pulling the liquid from under the fat with a turkey baster.

I added the stock to the large pot and the following:

I put the soup back in the slow cooker to keep it warm for serving. 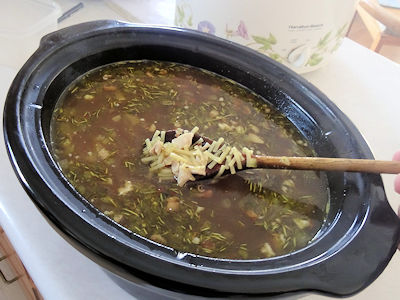 This is a great chicken noodle soup. The long boil of the bones gives a great deep chicken taste. Sautéing the bacon and vegetables gives a nice smoky taste and complexity. The touch of curry and herbs don’t overpower and just add nice after notes. The soup brought compliments from the curlers which I humbly accepted.