A New Way To Flavour Them 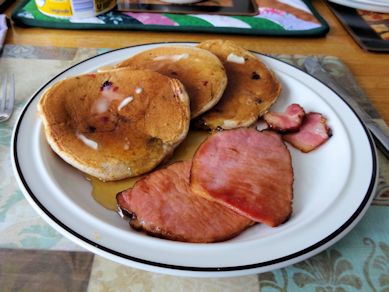 I have been making hams out of pork loins for some time now. They are lean and tasty. The problem was, I wanted to get a good maple flavour and just couldn’t get there.

I tried something new, injecting the pork loin with honey or maple.

I started with a five pound loin half that was on sale. I cut it in half as I wanted a honey ham and a maple ham.

Now is the time to do some math. You have to get the right amount of curing agent. Too little and the hams won’t cure and could spoil and make you sick. Too much curing agent is unhealthy and makes you sick.

The curing agent I use is called Prague Powder 1. It is also known as Instacure 1, Pink Salt or other brand names. The key thing to look for is that it is 6.25% sodium nitrite.

You need 2 grams of curing agent for each pound of water and meat. A US gallon weighs just over 8 pounds. So, the water will weigh 8 pounds and the meat weighed 2.5 pounds. That is a total of 10.5 pounds. Multiply that by 2 and you get 21 grams (1 1/2 tablespoons) curing agent that will be needed in the brine.

For the container that needed 1/2 gallon, the water weighs 4 pounds. The meat weighs 2.5 pounds. That is a total of 6.5 pounds. Multiply that by 2 and you get 13 grams (scant 1 tablespoon) curing agent that will be needed in the brine.

Mix the liquid until the sugar is dissolved and the brine is brown and clear.

Mix 1/4 cup of honey with 1/2 cup of the brine and inject it in one of the loins every inch or so.

Mix 1/4 cup of maple syrup with 1/2 cup of the brine and inject it in the other loin every inch or so.

Put the loin in a container and cover it with the brine. Put a plate on top to keep the loin submerged. Repeat with the other loin.

Put the loins in the fridge for 12 days, turning every day or two.

Take the loins out of the brine and rinse them well. Soak them in cold water for 2 hours, changing the water every 1/2 hour. Dry the loins with paper towels. I chose to put some Cabelas Open Season Pecan Honey Seasonings on the surface. This is optional or you can experiment with different seasoning blends. I also tied the loins to make them a bit thicker. This is optional as well.

Put the loins on a rack in the fridge overnight, uncovered. 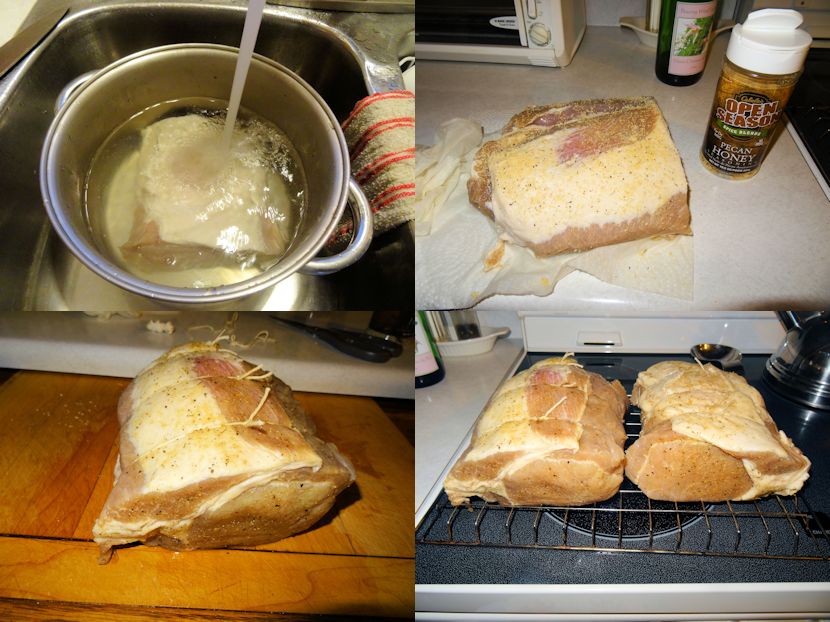 Take the loins out. It is very important that they be dry before you smoke them. To make sure, I put my loins in my Bradley smoker set at 140 F with the vents wide open and no smoke for 90 minutes. Then I turned the heat off and started smoking with hickory pucks for 4 hours.

Then I turned the heat up to 160 F for two hours. You are not trying to cook the loins, just get nice smoke flavour and some colour. When I took the hams out, they were only at 102 F internal temperature.

I wrapped the loins in plastic wrap and put them on a rack over simmering water to steam them until the internal temperature reaches 150 F. Check often, it doesn’t take long. These loins only took 30 minutes to get to temperature and I have had them cook faster and slower.

I put the ham in the fridge for a couple of hours to set up. There is just She Who Must Be Obeyed and I so I cut the hams into smaller pieces to freeze.

Of course, you have to try some. I had a ham and cheese sandwich right away and ham steaks with haskap pancakes the next morning.

These loin hams are not as moist as a full joint ham but they have a lot less fat. They are immeasurably better than the formed hams in the supermarket. I always think those hams taste like rubbery sawdust. These make a good sandwich and fry up well. The lower fat content is better for my girth control.

The injecting the honey and maple syrup worked great. I got a nice overtone of honey in one ham and the maple in the other. I will be doing this from now on.