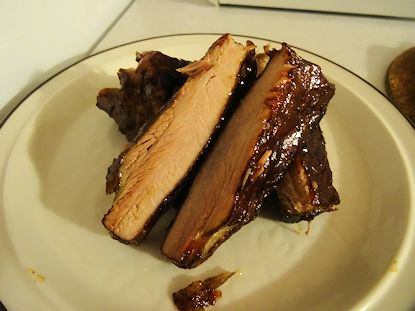 I have been perfecting the method I use to make ribs. Translation: I am trying to make ribs that She Who Must Be Obeyed loves.
In my post, Spareribs by Temperature, I got the texture of my ribs the way She Who Must Be Obeyed  I like them. I tried to get the timing of putting barbecue sauce on them right by putting the sauce on when the internal temperature of the ribs were 175 F when my  target was 185 F. The sauce was just slightly over caramelized.
This project was an attempt to get the saucing for wet ribs right.
It was an interesting day as snow had fallen and it was colder than a mother in laws stare.

I peeled the silverskin off the back of my ribs by gripping it with a paper towel and pulling it off. I rubbed a Kansas City style rub into the ribs and put them in my Bradley Smoker set at 230 F with pecan smoke. You can do this in a 230 F oven but you won’t get the smoke taste.

The missus doesn’t care for a heavy smoke so I stopped the smoke at 3 hours. I could have continued cooking in the Bradley but why heat up the outside on a winter day. The possibility of my tender parts freezing had nothing to do with my decision to finish the project in the oven. So, after 3 hours, I put the ribs in a 230 F oven. When the internal temperature got to 185 F, I reduced the oven temperature to 190 F and brushed the ribs with a Kansas City style barbecue sauce. I gave them 15 minutes in the oven and then brushed them again. I put them in the oven for 15 minutes.

I took them out and let the internal temperature go to 155 F. I cut into ribs and served.

I am really happy with these ribs. They are so tender they pull from the bone when you bite but have enough chew to leave a bite shape on the meat rather than the meat falling off the bone. The sauce is caramelized perfectly to our liking.

The secret to great and fun cooking is to keep tweaking your recipes to make them better.