Beef is very expensive here right now. However a cross rib roast came on sale for just below the national debt. As this is my favourite cut for a pot roast and it is currently cold here, I had to make a pot roast.
You’ll note this pot roast has canned mushroom soup in the gravy. If you ever had a pot roast where mushroom soup and water are added to a pot and the beef boiled for hours, you might be put off by this. Many mothers made their pot roast this way and made insipid weak gravy.

In this case, the mushroom soup is just an ingredient that gives nice body to the gravy. There are other flavour components that give a great complexity to the gravy.

Dry the roast with a paper towel. Taking the excess moisture off the beef makes it brown easier. Sprinkle kosher salt and pepper over roast. Take it easy on the salt. Even the low salt mushroom soup and stock have a lot of salt in them. It is easy to add more salt at the end if you need it.

Heat the oil in a large pot or dutch oven over medium high heat. Brown the roast on all sides, about 2 minutes a side. Remove the roast to a plate.

Add the garlic, onions and water to the pot. Stir until the water has evaporated and the onions have a nice golden colour. Add the mushroom soup and beef stock. Stir until smooth. Put the roast in the pot and bring the gravy to a boil. Cover the pot with a tight fitting lid. You can either put the pot in a 325 F oven or keep it at a low boil on top of the stove. I prefer the oven but both work. 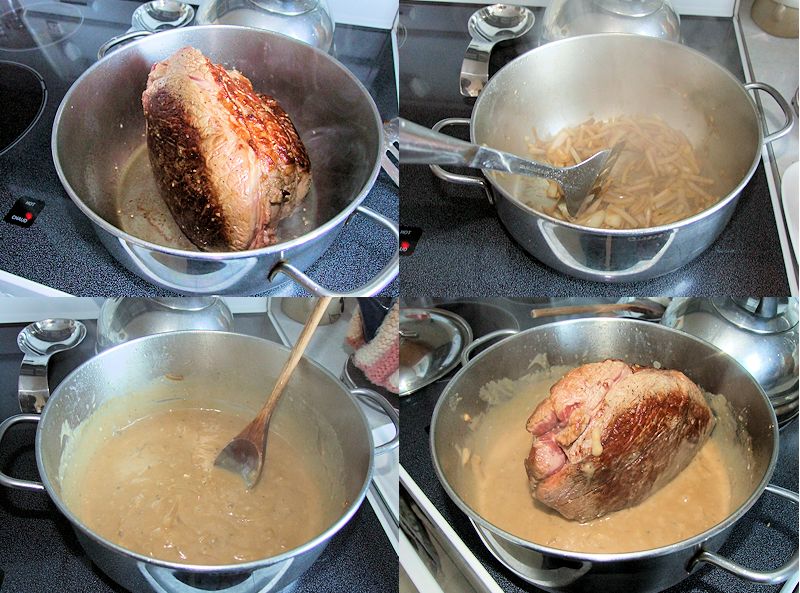 After 1 hour 45 minutes, turn the roast and add the potatoes. You don’t want to over crowd the roast so if you want more potatoes, you will have to steam, microwave or roast extras. Put the lid back on and cook for another 1 hour 15 minutes.

Take the roast out of the oven or off the heat. Remove the potatoes to a covered casserole and keep warm. Remove the roast to a cutting board and tent with foil. 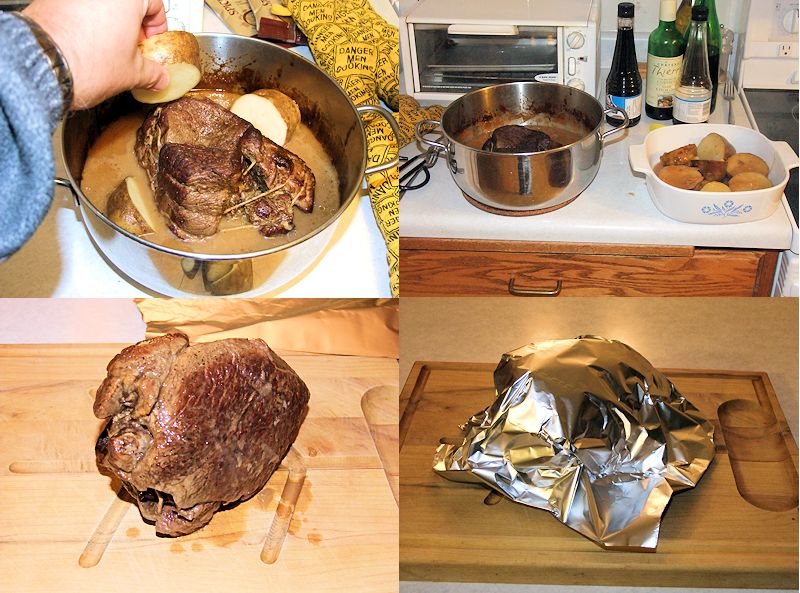 Put the pot on a burner and bring it to a low boil. Add the soy sauce, sherry, and Worcestershire sauce. Taste and add more salt or pepper if desired. Add the cornstarch and water and stir until thickened. Carve the roast and serve with the potatoes and thickened gravy.

This is the definition of winter comfort food. Pot roast is about the gravy. The beef is tender and moist but the star is the gravy. This gravy has a good beef flavour, body from the mushroom soup and a touch of sweetness from the sherry and Worcestershire sauce. I could just put a straw in it and sip away.

I love pot roast and this is a good one.