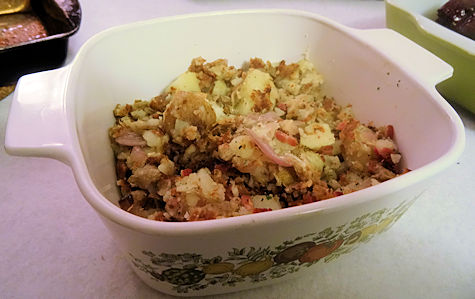 I started with 3 cups of cubed potatoes. I put them in a microwave safe casserole and just covered them with water. I put the lid on the casserole and microwaved them on high until the were tender. For this dish, cook them until the are tender. You want them to break up a little while frying. It took about 15 minutes here but that will vary with the power of your microwave and altitude.

While the potatoes were cooking, I fried two strips of bacon (I cut them in half so they curl less). I cooked them until they were just about crisp. If you over crisp them, they don’t cut as well and you won’t get those nice bacon chunks in the potatoes.

I sliced the bacon crosswise into 1/8 inch pieces.

I put the pan with the bacon drippings over medium heat and added the potatoes and 1 cup coarsely chopped onions. I like red onions for looks but any onion is fine.

I fried until there started to be a nice brown colour to the potatoes. The potatoes will want to start sticking to the pan a little. Make sure you scrape up those brown bits that stick to the pan while they are frying. They are what give the potatoes the colour and flavour. I fried mine for about 5 minutes.

I stirred in the bacon and added the pepper and fried for 1 more minute.

We served ours with Old Fat Guy Smoked Shortribs and coleslaw.

These are easy and tasty. They are not fancy but I feel like I am eating a good meal made by mom.