The cost of wild salmon is very high these days. So, when the local supermarket had a sale on frozen pink salmon fillets for less than a king’s ransom, I bought some and made smoked salmon.

I only started smoking a year and a half ago so I have been following recipes pretty closely. For this project, I started to do what I love, experiment. First, I cut the fillets to a size I would normally pull out for one serving. I didn’t take the skin off. I have read pro and con for this. All batches until now, I took the skin off so I decided to try skin on. For the first package of salmon, I decided to go for a maple glazed salmon. I made a brine of:

I heated it until the sugar and salt dissolved completely and let it cool. I put the salmon in a nonmetallic baking dish and covered with the brine.

For the second batch, I went more savoury. I made a brine of:

I heated it until the sugar and salt dissolved completely and let it cool. I put the salmon in a nonmetallic baking dish and covered with the brine.

Both batches were put in the fridge for 24 hours and turned occasionally.

After 24 hours, the salmon fillets are taken out of the brine and rinsed thoroughly. Dry them with a paper towel and put them on a rack over a tray and in the fridge overnight. Take them out and dry with a paper towel again. Let them sit on the counter for an hour. The idea here is to get the surface of the salmon as dry as possible.

I put them in a smoker set at 140 F over apple wood smoke. After an hour, I brushed the savoury fillets with 1 tablespoon of honey. If you microwave it for 15 seconds, the honey is easier to paint on. I brushed maple syrup on the maple glazed fillet.

After another hour, I turned the heat up in the smoker to 150 F. I did nothing more to the savoury but I added another layer of maple syrup to the maple glazed fillets.

For each of the next two hours, I increased the heat to 160 F and then 170 F with maple syrup brushed on the maple glazed each time.
I let the salmon smoke at 170 F until the internal temperature was 145. This means you can take the thinner pieces off first but don’t worry if they go higher, This is the drier version of smoked salmon.

Pull them out and let them cool on a rack. 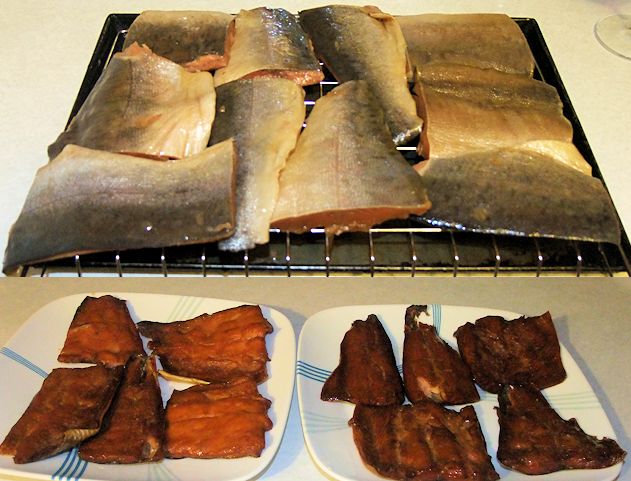 There are three types of smoked salmon. Cold smoked like lox, cooked smoked with a texture like baked salmon and drier smoked salmon for snacks and appetizers. This is the last kind and is my favourite.

The savoury salmon (on the right in the picture above) took on a nice touch of the garlic and has a nice firm chewy texture. The maple glazed salmon has a nice gloss and a sweet taste. It also has the drier firmer texture I prefer. I thought both were a little salty and will cut back 1/3 on the salt next time. However, I should warn you, I have cut back on my salt intake over the last year and find I am much more sensitive to salt. She Who Must Be Obeyed thinks the salt level is fine.

I will also remove the skin the next time. It is just a bit easier to eat without having to futz with the skin.

Overall, I am very happy with the results on both versions. I will make them again with these tweaks. 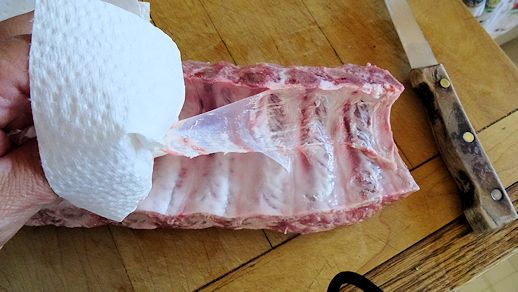