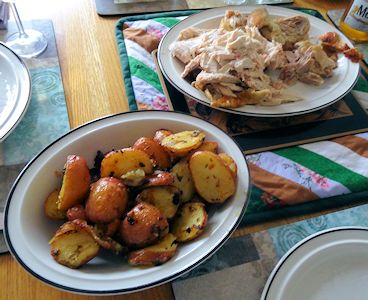 My buddy asked for a whole roasted chicken that was carved. I thought that would be a little boring but took on the challenge. I decided to increase the flavour and do Piri Piri chicken. If you are going to roast a chicken, it just have to have roasted potatoes. so I did Greek Potatoes under the chicken.

Piri Piri seasoning can be purchased in the spice section of your supermarket or you can mix it yourself.  There are several recipes on line for making your own. I used a commercial mix for this cook as a friend had given it to me.

I started with a four pound chicken. I rinsed it and dried it off with a paper towel. I cut a lemon into quarters and squeezed them over a bowl, saving the juice for the marinade. I put the squeezed pieces in the chest cavity of the chicken.

I added the olive oil to the lemon juice and put in 10 ml (2 teaspoons) of the piri piri seasonings.

I carefully worked my fingers under the breast and thigh skin being careful not to rip the skin. I rubbed the marinade mixture under the skin.

I sprinkled the surface of the chicken with the remaining 10 ml (2 teaspoons) of the piri piri seasoning. Let the bird sit in the refrigerator for an hour.

I made a sauce for the potatoes by mixing the lemon juice, garlic, olive oil, water, oregano, thyme salt and pepper.

I tossed the potatoes in the sauce.

After twenty minutes, I brushed the chicken with marinade.

Twenty minutes later, I brushed the chicken with marinade.

After the chicken had rested for 15 minutes, I carved it, took the potatoes out of the oven and served the meal.

We served it with corn on the cob, fresh cucumber and tomatoes.

OK, my buddy was right. This was a great meal. A nice fresh lemon taste to the potatoes and chicken with a bit of heat from the piri piri seasonings. 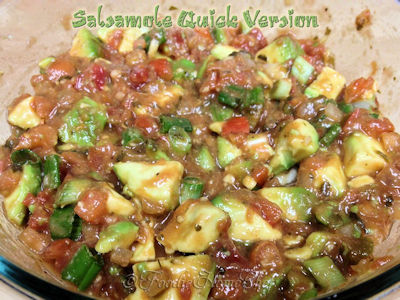