Oven Ribs, She Who Must Be Obeyed Has Spoken

There was an incredible sale on side ribs (spareribs) when we went grocery shopping. We picked some up for dinner and put some in the freezer. This is when the problem started.

There is no doubt I like smoked food more than She Who Must Be Obeyed. She said she didn’t want the ribs smoked.

Now, side ribs are not as tender as back ribs. They have a lot more connective tissue. So, if you grill them, they tend to get tough. You can braise them with moist heat but I think that ruins the flavour and texture. So, I decided to try slow cooking them in the oven like I would in a smoker.

I gave the ribs a generous dusting of Cabela’s Open Season Pecan Honey Seasonings. Then I put the ribs in a 230 F oven. The low long cooking helps break down the connective tissue which adds a great texture and flavour.

After two hours, I sprayed the ribs down with apple juice. I gave it another spray at the three and four hour points. After the ribs had been in the oven for 5 hours, I checked to make sure they were cooked. You do this by bending the rack. If it bends easily and there is some small splintering at the bend, they are ready for the sauce.

I brushed a thin layer of my homemade barbecue sauce on both sides of the rib. Use your favourite barbecue sauce. I did this again 15 minutes later. I gave it a thicker brushing 15 minutes after that. 15 more minutes in the oven and pull them out.

Cut to individual ribs and serve.

Just between you and me, She Who Must Be Obeyed was wrong on this one. The ribs had a great texture. The Cabela’s seasoning and my barbecue sauce gave a nice flavour and sticky surface. They tasted very good. However, the smoke adds a complexity that I missed.

That being said, if she wants non-smoked ribs again, these are good. Also, if you don’t want to smoke in subarctic temperatures or you don’t have a smoker, these are an excellent choice. 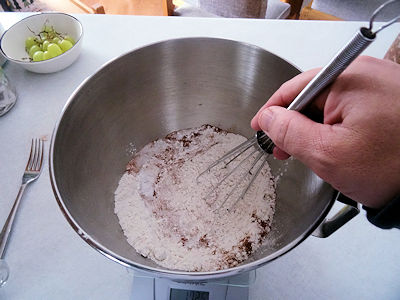