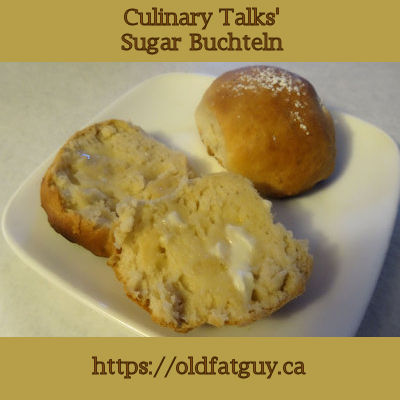 I just love learning about new styles of food and dishes and social media has made this so much easier. I found the great food blogger Kristina and her wonderful site, https://www.culinarytalks.com/. She has many great recipes from Europe, many from central and eastern Europe. She is also an author. Check out her Ebook, Eat, Shop and Love.

I saw her post for Sugar Buchteln on twitter and had to give it a try. I will show you my efforts and changes but if you want the recipe, go to her site at:

I started by re-hydrating the yeast. She calls for fresh yeast. I only had dried. I added 20 ml (4 teaspoons) of dry yeast to the milk and sugar and let it sit for 15 minutes.

I measured the other ingredients and melted the butter in the microwave.

I will comment on the sugar. She calls for raw sugar. From when I was a kid, that would be light brown sugar. From a Caribbean friend, it is turbinado sugar. I had dark Demerara sugar. I decided to go with two parts Demerara  and one part white.

I put the yeast mixture, eggs, sugar, salt, lemon zest and butter in my stand mixer bowl and mixed them. I added the flour to these and attached the dough hook to my stand mixer.

I mixed until the dough started to cling to the hook and then mixed for 8 minutes with the dough hook.

The dough is quite soft but manageable. I floured a surface and gave the dough a few kneads by hand and put it back in the bowl. I covered it and let it rise till doubled. She says 1 1/2 hours. It took me 2 hours but my kitchen is quite cool in the winter.

I cut the dough into thirds and made a cylinder of each third. I divided each cylinder into 5 parts that I formed into balls.

I put the balls in a pan that I has sprayed with baking spray. I let them sit for 10 minutes and brushed with melted butter.

I baked for 40 minutes and they were done. I confirmed this by using an instant read thermometer. If the internal temperature is over 200 F, it is done. They do dark up a bit more on the bottom so I would start checking at 37 minutes.

I brushed them again with melted butter and sprinkled icing sugar over the top. 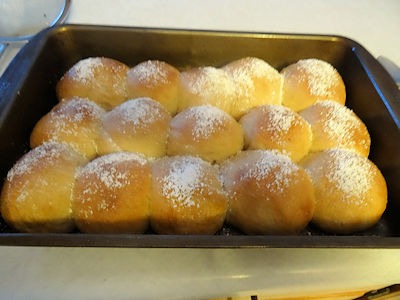 Where have these been all my life? They are wonderful. They are a sweet roll but not over the top like a cinnamon roll. They have a nice mild sweetness and the lemon zest give them a brightness. The texture is moist and fine. If you are having guests for breakfast, put some of these on the table and watch them disappear. 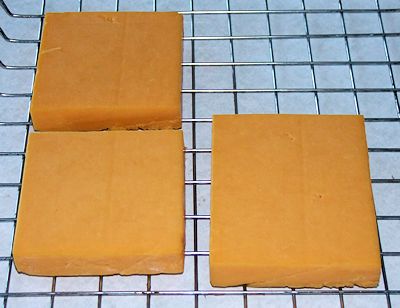 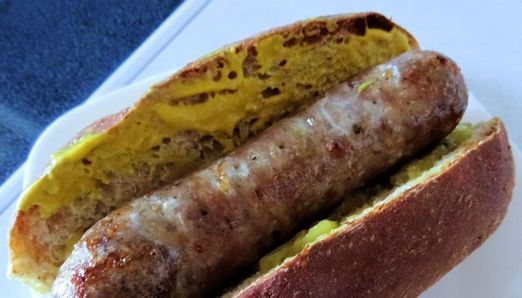