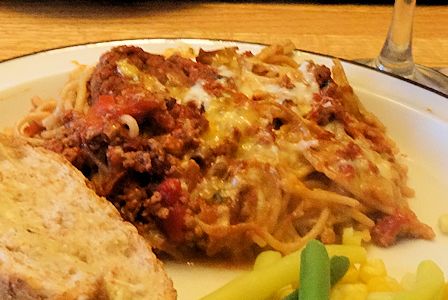 I ordered baked spaghetti at an Italian restaurant recently. It was spaghetti tossed with Bolognese sauce, some cheese sprinkled over the top and broiled. It was OK but I was sure I could do better. Here is my effort. END_OF_DOCUMENT_TOKEN_TO_BE_REPLACED 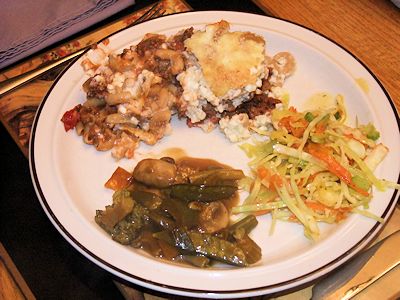 I suspect you have several dishes that you make over and over again. This is one of them. It is comfort food similar to a lasagna but with different seasonings and using macaroni. I would have no problem serving this to company. END_OF_DOCUMENT_TOKEN_TO_BE_REPLACED

He went over a recipe for Slow Cooker Lasagna. It sounded reasonably easy and used ingredients that are readily available in the supermarket. He let the CBC post the recipe. Here is the link:

I decided to give it a try and the pictures of my efforts are above.
I only made 1/2 the recipe as I only have a 3 quart slow cooker and I was cooking for She Who Must Be Obeyed and myself. I used mild Italian Sausage (if I made it again I would use spicy). I also used whole wheat lasagna noodles as I like the flavour better and it gives some fiber.

It only took a little over 3 hours for it to cook as I had halved the recipe.

I served it with garlic bread made from a whole wheat French loaf and steamed broccoli, carrots and corn. I had a nice Shiraz with it and the missus had a Chardonnay.

This was a very easy recipe to make. I put it together in just a couple of minutes. The result is better than I was expecting in a slow cooker pasta. The taste was nice but could use a bit more seasoning in my opinion. I think it would be better with spicy Italian sausage. There isn’t  enough sausage in it that the spicy sausage would make it hot but it would punch it up a little.

This would be a great recipe to whip up in a hurry and then relax while it cooks away. I would make it again. I might also buy the book.