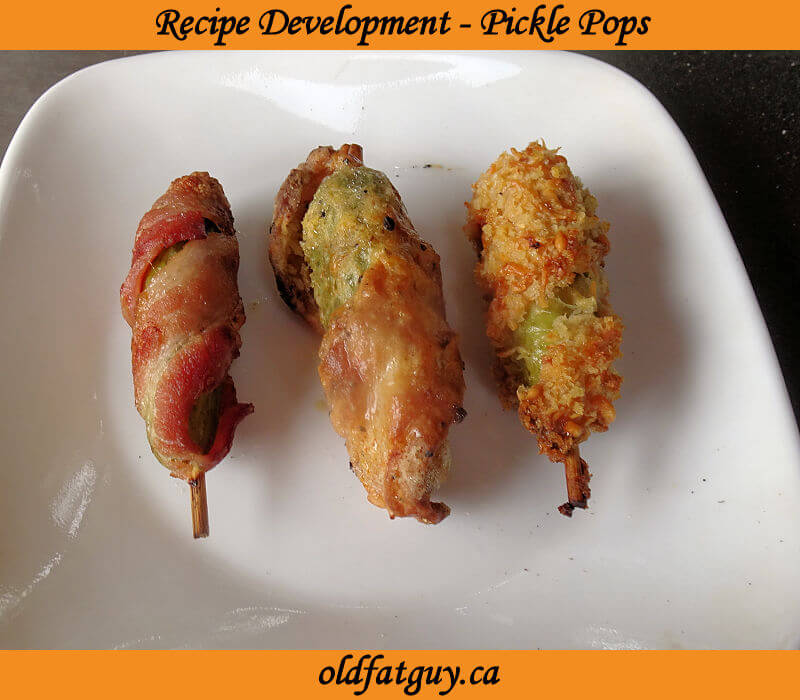 I get a fair number of questions about how I come up with my recipe ideas. This post will take you through my work in developing Pickle Pops.

Then, I think about what else is salty and sour. Well, bacon is salty and dill pickles are sour. Here was the basis of my effort.

Obviously, the bacon has to be cooked. I like using my Traeger Timberline so I thought about wrapping pickles in bacon and cooking them in the Traeger. Of course, I could use an oven instead but I think the air circulation in the Traeger is superior and gives a good surface crispness to food.

It seemed to me that this would be best as an appetizer. It has strong flavours that would pique the palate.

As an appetizer, I wanted smaller bites so I chose baby dill pickles for my pickle.

The bacon would have to be attached to the pickle so using a skewer to make a pop type appetizer seemed natural.

How to prepare it? Three thoughts came to mind:

As I was thinking about the third possiblity, parmesan cheese seemed like a good addition to add some savoury notes and to add to the saltiness. Parmesan was added to the mix.

I started by wrapping 3 baby dills in a 1/2 strip of bacon each and pushing Them onto a bamboo skewer. I cut the skewer to make 3 pops.

When developing recipes, you do things wrong. I should have put two pickles instead of three on one skewer as the handles for the pops were too short.

I set one aside to be the pickle and bacon alone.

I made a flour dredge of:

If you are doing recipe development, make sure you keep copious notes. If you want more pepper flavour you will have some idea how much to add.

I then made a seasoned egg wash of:

I rolled one of the pops in the flour, dipped it in the egg wash, and gave it another roll in the flour.

For the last pop, I rolled the pop in the flour, dipped it in the egg wash, and rolled it in a mixture of 15 ml (1 tbsp) panko bread crumbs and 15 ml (1 tbsp) grated parmesan.

I wanted good browning so I set my Traeger to a reasonably high temperature, 375 F (190 C).

I put the pops in the Traeger. If doing them in an oven, cook them on a rack over a tray. 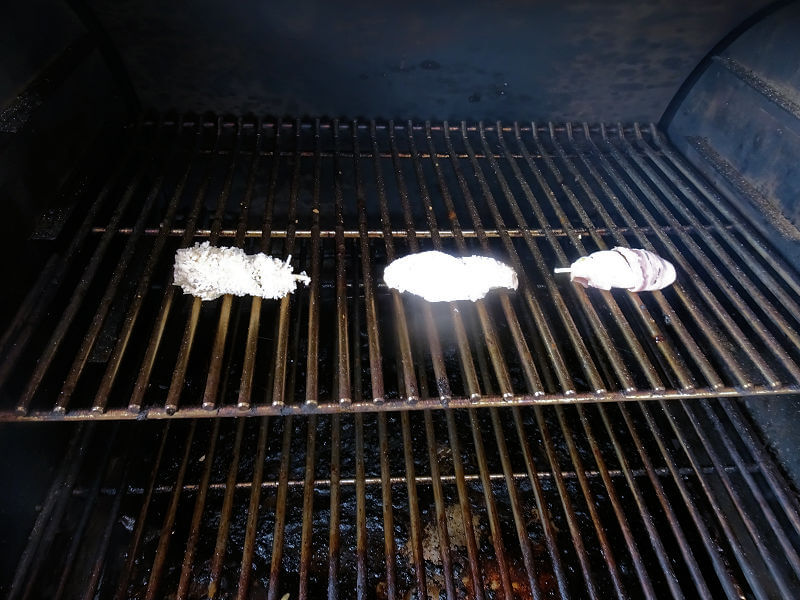 I’ll take a moment here to point out that you will likely have come to a decision as to which will be best before you even start cooking. Why not just go with the one you think will be best? I find the one you think is going to be the winner, often isn’t. In this case, I believed the double dipped would be the best. As you will see, I was wrong.

I cooked the pops for 15 minutes. and then turned them.

I cooked for another 10 minutes to finish browning. Depending on how much direct heat your oven or smoker has, this could be more or less in your unit.

I took them out, let them rest for a couple of minutes and took a bite of each. 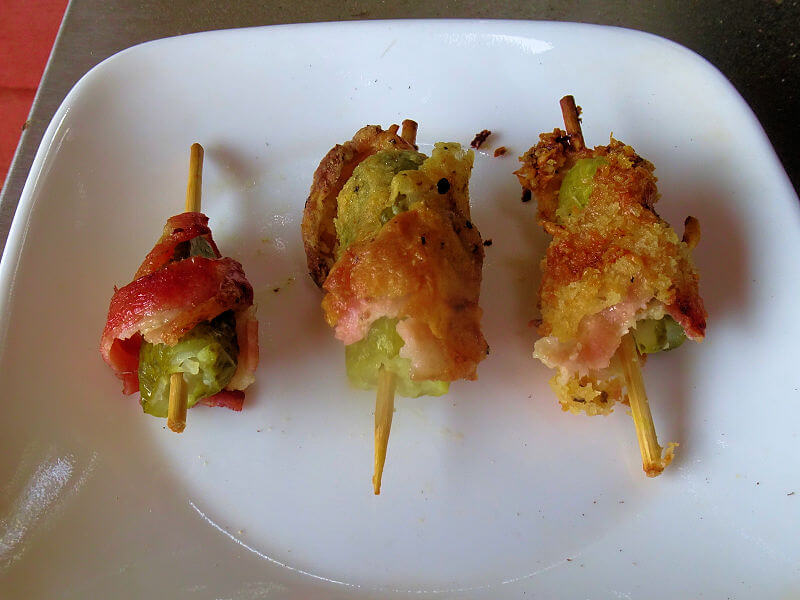 The plain bacon wrapped was tasty but kind of boring. There was the salty/sour taste I wanted but it needed more complexity.

The panko breaded with parmesan was over the top good. The panko gave a great crunch and the Parmesan added a touch more salt and an earthy goodness that was wonderful.

All three still had some crispness in the pickle and the bacon was cooked well.

Is the recipe finished. No. The same defective mental process told me this needs a touch of sweet, a bit of heat, and some creaminess to offset the crunch. I need to make a dipping sauce. Honey Sriracha Remoulade? Maybe. We’ll see.