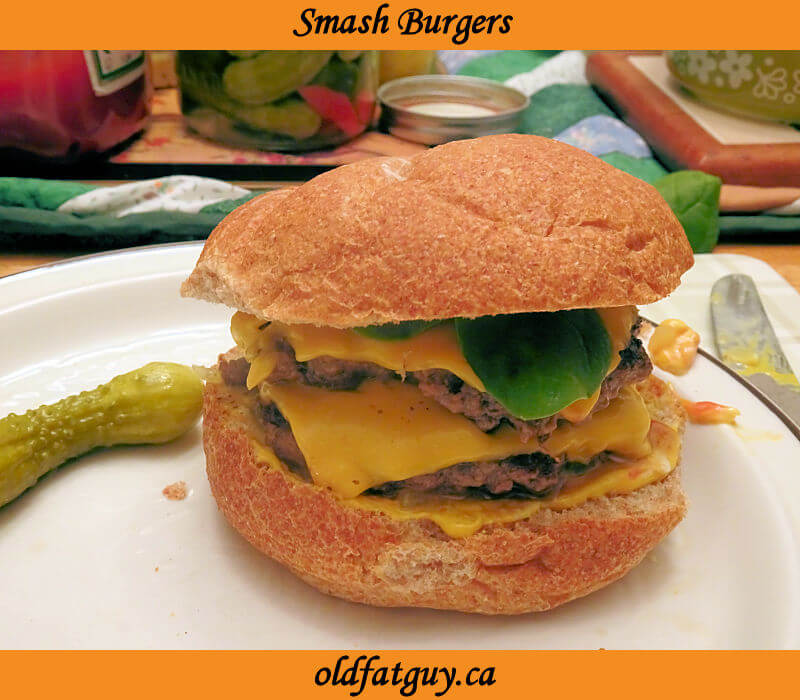 Smash Burgers have been all the rage for a while. They are a very tasty way to make a burger but the whole concept makes me shake my head.

You see, the name Smash Burger is new, but it is the way people made burgers for decades.

People made burgers by dropping a ball of ground beef on a flat top grill and pressing it flat in diners and restaurants before preformed frozen patties became de rigeur in fast food restaurants. We have become so used to these slabs of frozen beef we forgot about making burgers the old way.

So, what is a smash burger? It involves taking a ball of ground beef that has been handled as little as possible, dropping it on a hot metal surface, pressing it thin, and cooking it quickly.

Handling the meat as little as possible gives a great texture to the burger.

Pressing it thin on a metal top gets the meat in contact with the hot metal. This allows a crisp caramelized surface, and the meat adheres to the metal at first, minimizing shrinkage of the burger.

The thin meat cooked quickly over high heat seals in a lot of juices to make a moist burger.

To get this result at home, you would use a flat metal grill or frying pan. It could be steel or cast iron.

This introduced a problem for me. I have a couple of fry pans that aren’t nonstick, but I could only get a couple of burgers in the pan. I do have a larger electric fry pan, but it has a nonstick coating. Could I cook a smash burger in a nonstick pan?

The problem I was afraid of was the burger shrinking while cooking. However, it was worth a try. The method is the same if you are making the burger on a nonstick surface.

I used my fingertips to gather 450 grams (1 pound) of ground beef into four loose ball shapes. Do not squeeze or roll the meat into a ball. You want to handle as little as possible.

Preheat your cook surface to medium high. It must be hot. For the electric frypan, I set it to 375 F (190 C). You can drop 1/2 ml (1/8 teaspoon) water on the pan. It should stay in a ball and move around the pan until it evaporates. If it splatters, it isn’t hot enough.

Put a square of waxed paper or parchment paper on the ball of meat. Press the meat to 1/4 inch (6 mm) thick with a large spatula or the bottom of a pot. Hold the spatula or pot on the patty for 7 or 8 seconds. Peal the paper off. Repeat with the remaining balls.

This was where I was afraid the patties would contract and get thicker on the nonstick. They did thicken a little but not enough to worry about.

Cook the meat until you start to see some light brown on the top of the edges and juices start to come through the surface, three or four minutes.

Flip the burgers and cook to an internal temperature of 160 F, about two minutes. Sprinkle whatever seasonings you like over your burger. I like seasoned salt but use any mix you like.

If you like cheese on your burger, put it on at the end to melt a little.

Put on a bun with your favourite burger accompaniments.

This is a great burger. It has a great crispy crust, juicy meat and a lovely flavour. By making your burger with two thin patties instead of one thick one, you get more of that great burger crust taste.