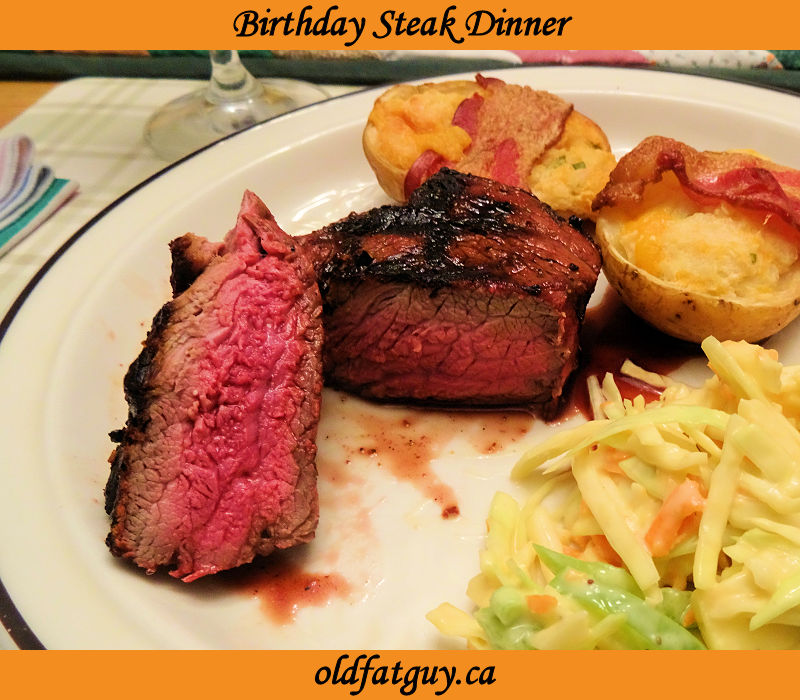 It happens once a year. I don’t care for them anymore but there is nothing you can do about them. It is my birthday. The upside is I feel like I can make anything I want to eat.

I have reverse seared steaks before but now I had my Bradley P10 Smoker. Could I cold smoke a steak and then cook it on my Weber Genesis? I had to know.

I started by picking out the steaks I wanted. I can’t eat as much as I used to. So, when I went to the supermarket, I purchased two sirloin medallion steaks at the premium meat counter. They are smaller around but thicker. Just what I was looking for.

It is colder right now (7 C 44F) so I felt comfortable putting it in the Bradley with no heat turned on and using two hickory pucks for 40 minutes of smoking. It did raise the temperature in the smoker to 24 C (75 F) but that should be safe for the 40 minutes.

She Who Must Be Obeyed was sceptical of my efforts, so I did not cold smoke hers. You will note how one of the steaks is darkened by the smoking.

I gave both steaks a good coating of Traeger’s Prime Rib Rub.

The sides were mushrooms and onions, She Who Must Be Obeyed’s great coleslaw and Bacon Wrapped Stuffed Potatoes.

The cold smoking did add an additional layer of flavour. I think I will go for 60 minutes of cold smoking next time to get even more.

That being said, the meal was great! A tasty steak done just the way I like it. Great sides and a pretty lady for company. The perfect birthday meal.