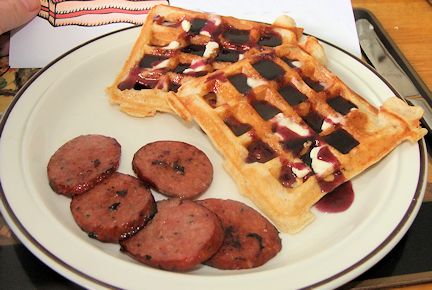 I make my own bacon. It is very good and I have fun making it. The problem is that I like maple and pepper bacons. The stuff they sell in the stores mostly has artificial flavours in them.
When I try curing my bacon with maple syrup and peppers I get some maple and pepper flavour but not as much as I’d like.

I decided to get creative and make a sausage with cured pork, pepper and maple. I would then smoke the sausage to make it more like bacon.

When you are making any kind of sausage, it is important to keep the meat cold. Put the meat in the fridge or freezer until very cold. Put all the equipment you will be using in the fridge, freezer or outside if the temperatures are low.

I ground the pork through the fine plate on my Kitchen Aid grinder attachment. You can use any grinder you have.

Then I mixed the rest of the ingredients into a slurry. I used my hand to mix the meat and slurry together for 2 minutes. Then I put the mixture into the mixer bowl of the Kitchen Aid and mixed it with the paddle for 2 minutes (I did two batches so it didn’t overflow the bowl).

Put the meat in the fridge for an hour to get it cold again.
While the meat is chilling, fry a bit up to make sure you like the amount of pepper and maple syrup.

Also, you will want to soak some fibrous casings in warm water while the meat is chilling. Fibrous casings can be purchased on line from sausage supply companies. They are not edible but do allow smoke through. So, you have to peel the sausage before you cook or eat it. I used two inch casings but I would use larger next time so the slices would be larger when you fry them.

You have to stuff the meat into the casings. This can be done with a sausage attachment for the Kitchen Aid but that is like trying to put toothpaste back in the tube. I have a dedicated vertical stuffer. If you are going to be doing a lot of sausage, it is worth it.

A friend has suggested you could put the sausage in a pan and then smoke it and slice it like bacon. It makes sense but I haven’t tried it.
Once the sausage is stuffed into the casings, tie the ends closed. If you will be using a heat probe to keep track of the internal temperature of the sausage, put it in the end of one of the
chubs and tie around it.

Take the chubs out and put them in your smoker at the lowest temperature possible. I used an A-Maze-N Pellet Smoker with maple pellets and my Bradley Smoker which was turned off.
After an hour of smoking, I turned the heat up to 140 F for another hour. I increased the temperature 10 F each 1/2 hour until the Bradley was set at 180 F. Then I continued smoking until the internal temperature of the chubs was 155 F.

If you don’t have a smoker, you can do this in the oven with the same temperature settings but it will have less smoked bacon flavour.
When the internal temperature is 155 F take the chubs and put them in ice water. Then, let them dry at room temperature for an hour. Put them in the fridge overnight before serving.

To serve the sausage, slice it thinly on the bias and fry like bacon.

This has a great maple and pepper taste. It doesn’t have the texture of bacon of course but it is very tasty. I will be making this again!