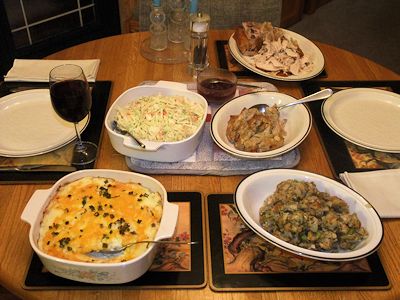 This is the final post on the turkey dinner. It is how I cook the turkey and make the gravy.
Before I start, I would like to comment on brining. If you read the gourmet web pages, they will suggest that you are doomed if you don’t brine the bird. This is absurd on the face of it. People have been eating great turkeys for a long time without brining. However, they are correct that brining gives you a moister bird. I find that, while the bird is moister, it is also softer. It is not like it is pasty or anything, it is just a little softer.

If I baste the bird regularly and don’t overcook it, I get a texture I like and a moist bird. So, while I have had delicious brined turkey, I prefer not to brine. So shoot me.

I start by preparing the turkey. If it is frozen, take it out of the freezer and put it in the fridge six days before you are going to cook it. Yes, this is a long time but it will likely take at least 3 days to thaw and a thawed turkey is safe in the fridge for 4 days and a frozen bird is difficult and dangerous to cook. Give yourself lots of time to thaw it.

On the morning of the day you will be cooking, remove the bag of spare parts from the turkey. Rinse the bird inside and out. Pat it dry with paper towels. I like to sprinkle it lightly with salt, pepper, onion powder and garlic powder, inside and out.

My wife’s family had a tradition of stuffing the small cavity (some say butt hole but I am not crude) with a sausage mixture. They did this to get more meat for a large family dinner. Now, we have smaller groups for Christmas and it really isn’t necessary. However, She Who Must Be Obeyed likes it and she must be obeyed! To be honest, since I have started doing this, I think the gravy tastes better. Sh! Don’t tell the missus I said that. 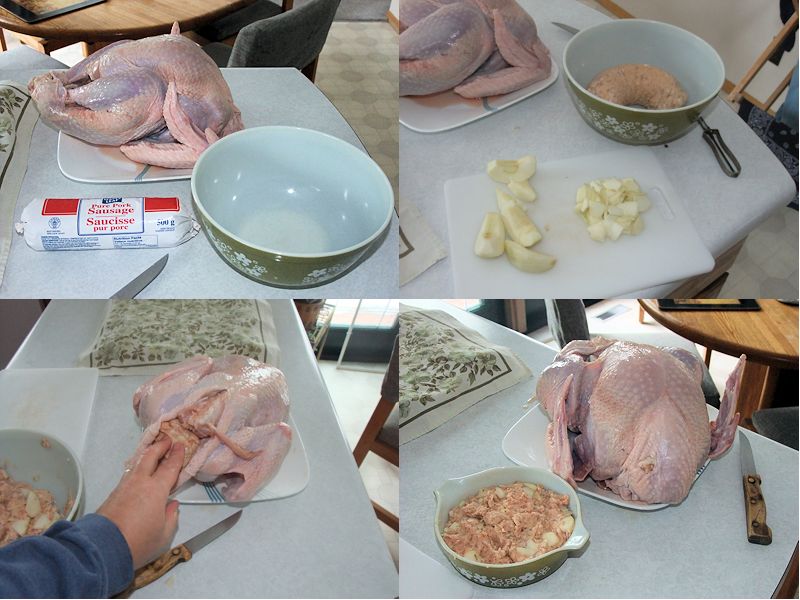 I take the neck from the turkey spare parts and put it in a saucepan and add 2 cups of water (even better, the water used to cook your potatoes or vegetables). I simmer the neck for 2 hours. I discard the neck and use this water later for gravy.

I then put a slice of bacon on each side of the breast. This will baste the bird with fat as it cooks for the first hour.

A word on how long to cook the turkey. You will read all kinds of different suggestions from 15 to 20 minutes a pound depending on the size of the bird. They are all careful to note they are suggestions. I find the time varies based on a bunch of factors. How accurate the oven is, how often you open the door. The density of the bird itself. I have found if I allow 15 minutes a pound plus 45 minutes, the bird is usually done before the meal is to be served and is easy to
keep hot in foil. If you have a huge 25 pound bird, it will take less than that per hour.

I suggest you check out a site like this for your bird.

I also suggest you don’t stuff the main cavity. However, I have not found stuffing the sausage in the small cavity has significantly increased cooking times.

Put the turkey on a rack in a roasting pan and put it in the preheated oven. Leave it alone for an hour and then baste it by brushing or using a turkey baster with drippings from the bottom of the pan. Continue to baste every 30 minutes.

Keep an eye on the bacon. When it is crisp take it off (it is delicious) and eat it.

If the skin starts to look darker than you like, you can tent with foil. I rarely have to do this. I do warn the skin over the sausage stuffing will get quite dark.

Start testing the bird by putting an instant read thermometer in the breast and the thigh below the drumstick connection. The breast should be at least 170 F and the thigh meat 180 F.

When it is, take the bird out and tent it with foil. It should sit like this for at least 20 minutes and can sit for up to 40 minutes before carving.

While the turkey is resting, pour the drippings out of the roasting pan into a glass measure.

Using a turkey baster, suck the drippings from under the fat layer on top and put them in the turkey roasting pan. Add the water you simmered the turkey neck in. Then add enough chicken stock to make up the amount of gravy you want. I added 2 cups because I like a lot of gravy. Put the roasting pan on a stove burner set on medium high. Stir to scrape up all the bits on the pan. While it is heating, put 1/2 cup of flour and 3/4 cup of water in a sealable container and shake it until it is well mixed. As the gravy starts to boil, pour the flour/water mix in a thin stream into the gravy, whisking all the time. Continue to stir as it boils until the gravy starts to thicken. If it is not thick enough for you, you can add more flour and water. When it starts to thicken, turn the heat to medium low and simmer for at least 5 minutes to cook out the flour.

Even if your gravy looks totally smooth, I strain it. The little bits that stick to the bottom give great flavour but I like my gravy smooth with no bits. 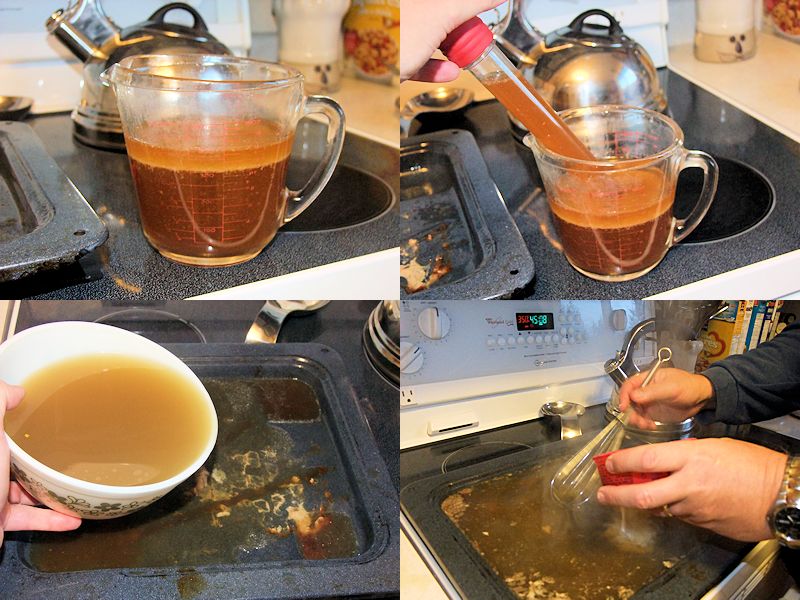 Take the sausage stuffing out of the small cavity. Carve the bird and serve it. However, please don’t throw out the bones, carcass and trimmings. They make the best soup but that is another post. 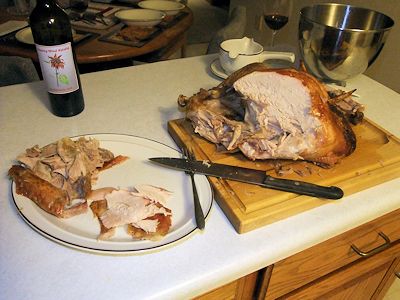 I make a traditional bird. Many brine or marinate their birds. Others use strong herb rubs before cooking. These are all great. However, they are not what I remember for a turkey dinner. This recipe gives a nice moist bird that has the flavour of the turkey prominent. Just
the way I like it for Christmas.