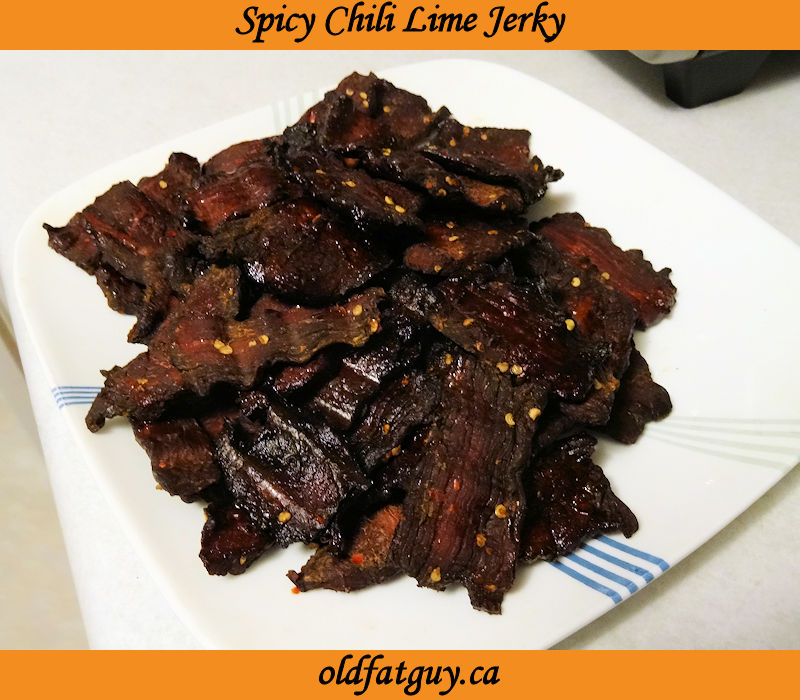 I love jerky. I also love spicy food but it doesn’t love me. The question was, could I make a spicy jerky that walked the tightrope between spicy and pain causing? This is my effort.

The first consideration was what kind of spicy? Different spices, peppers and sauces give different kind of heat. Some smack you in the mouth as soon as you eat them. Others have a slow build of heat.

I decided to go Asian. Asian Chili Garlic sauce is very hot without being dangerous and has a slow build to a warming heat. My jerky would try and emulate that by using small Thai chili peppers as the main source of heat.

I picked up an eye of the round roast. I like it for jerky as it is quite lean and fat is the enemy of jerky. It just doesn’t dry well. Although it is leaner, it does have a fat cap and some silverskin. I removed all of that.

This recipe would also be great with venison, elk or moose.

Then I prepared the marinade. These amounts are for 1 kg (2.2 pounds) meat.

I took the zest off two limes and then squeezed the juice out. I put the zest and juice in a blender. You could use a food processor or put them in a bowl if you are using an immersion blender.

I cut the stems off Thai chilies and cut them in half until I had a little less than 125 ml (1/2 cup) of chilies. I put these in the blender.

I added the following to the blender:

I blended until well mixed.

I put the meat in a non-reactive container and poured the mixture over the meat. I tossed the meat thoroughly, covered it and put it in the fridge for 24 hours, stirring the meat a couple of times.

I took the meat out of the marinade and spread it around on my smoker racks. I patted both sides dry with paper towel and let them sit for an hour.

I put them in my smoker and smoked for 2 hours.

If you don’t have enough rack space in your smoker, you can put a skewer through the end of each piece and hang the pieces through spaces in the rack. 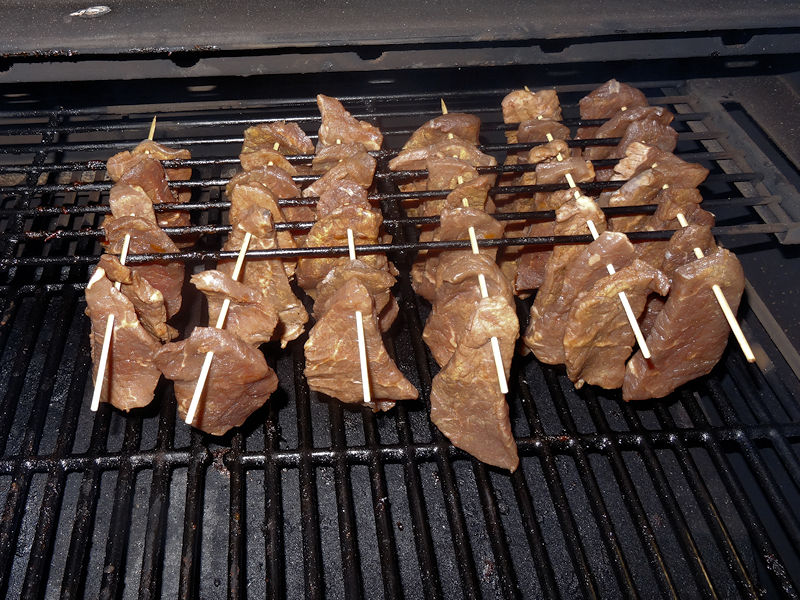 I made sure the jerky was done by bending it. It should crack at the surface but not break in two. You  can make absolutely sure by probing with an instant read thermometer. The meat needs to be over 155 F (68 C).

Let it cool and store in an airtight container in the fridge. Freeze any that won’t be eaten within a week.

I hate to blow my own horn but, Ta Da! The first thing you taste is a touch of lime. Then a slow heat builds to hot sensation on your tongue but it doesn’t cause any pain. Chili heads will like these but find them a little mild. Us mere mortals will find a definite heat but not over the top.