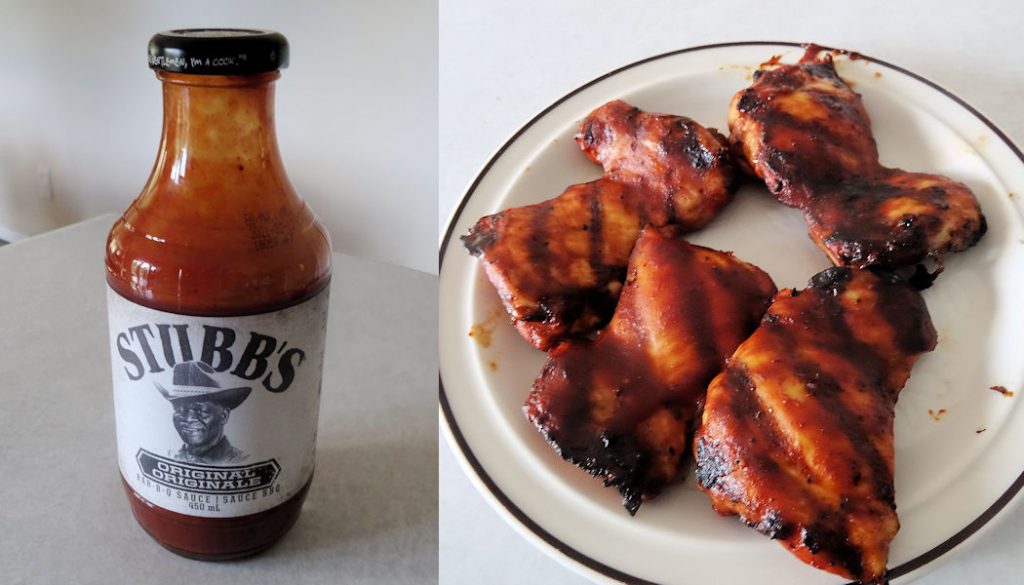 I do like to try premium barbecue sauces and a friend had told me he really liked Stubb’s Original so I gave it a try.

Barbecue sauces are normally used straight from the bottle, as a glaze on cooked food or on the table spread on cooked goods.

I started by pouring Stubb’s right from the bottle. The first thing I noticed is that it was thinner than most barbecue sauces. It still has a good consistency that is thick enough to apply as a glaze but isn’t very thick like ketchup.

On tasting it, the over-riding taste is heat. Not a burning heat but a definite warmth. The warmth was followed by a touch of sweet and a nice chili pepper taste. The finishing taste was a warm chili taste and a touch of tart.

This sauce is not as sweet as most Kansas City style sauces but it does have a nice touch of sweet.

I would say the main notes are the chili style warmth that continues right through the taste. I like the reduction in sweetness and the complex chili flavour.

I made some boneless chicken thighs on the grill to try it as a glaze.

I rubbed some thighs with a basic rub. I brushed a thin layer of sauce on them and put them over a low flame on my barbecue. I cooked them for about 6 minutes, brushed them again with sauce and flipped them. I cooked to an internal temperature of 170 F, about another 6 minutes.

The sauce worked well as a glaze. It didn’t char as fast as some sweeter glazes and gave a really nice colour. The heat I noticed on tasting the raw sauce was still there but was a touch subdued. The chili flavour was great went from a stronger start on tasting to a nice after taste.

I liked the result as a glaze.

In a later smoke, I served the sauce on the table with a grilled sirloin steak. The sauce was thick enough to coat the meat as a table sauce and really complemented beef well. I normally don’t like barbecue sauce with my beef but the Stubb’s has a touch less sweet and went very well. I found the touch of tart and pepper flavours really enhanced the beef without over powering it.

What the cheap sauces lack is complexity. They are sweet/spicy but that is it. A premium sauce has layers of flavour that entice you to eat more. Stubb’s has that complexity.

I found it worked very well as a glaze or a sauce that was tasty on beef, pork or chicken. However, I like a bit more sweet on my pork and chicken than this sauce. Don’t get me wrong, it was delicious but I prefer a sweeter sauce as a matter of personal preference.

As for a sauce for beef. This sauce excelled with beef in my opinion. It has a perfect warm chili pepper taste that complements a steak or ribs.

Stubb’s is a premium product that I believe you will enjoy.