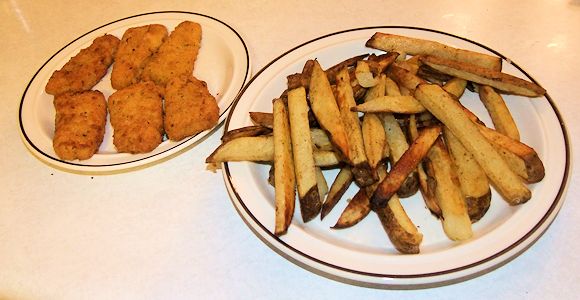 We had plans that would keep us busy for most of the day. We needed an ultra convenient meal that wouldn’t keep us busy as we would both be tired. We had some frozen coated fish in the freezer. I can put up with decent frozen pieces of fish in a pinch but I can not do frozen french fries. They are high in fat, low in taste and have a texture that is either mushy or leathery.

So, I oven fried some potatoes. It doesn’t take long. Just cut some potatoes into 3/8 inch sticks. Toss them with 1 1/2 tablespoons of olive oil for each baking size potato. You can add your favourite seasoning blend. I added a piri piri blend this time. It has a lot of flavour with a mellow heat that doesn’t kill you.

Spread them on a baking sheet and put in a 425 F oven for 45 minutes, stirring and flipping twice.

Oven frying potatoes gives them a nice touch of crisp around the edges with a nice soft interior. There is way less fat than in commercial fries and it is olive oil which is better for you than most deep fat frying oil. The piri piri really spiced them up.

Who says you can’t eat fries!