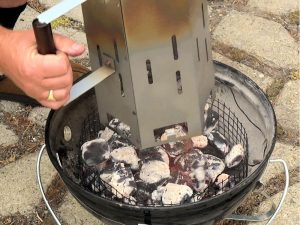 I was contacted by EZ Flame BBQ Inc. and asked to try out their product, the EZStart® Charcoal Chimney. There was two problems with this. First, I don’t like to take free products to review in case it sucks. Second, what could be new in the world of charcoal chimneys? You put newspaper in the bottom, coals in the top and light it.

On the first count, EZ Flame said they were fine sending me one despite me assuring I would give an honest review even if I didn’t like it.

On the second count, I went to their site and found out they have actually made a major improvement to the charcoal chimney.

The standard chimney is a tube with a grate one third of the way up it. Newspaper is crumpled up and put under the grate. Charcoal is put on the grate. You light the paper through ports in the chimney. The paper burns and lights the charcoal.

The EZStart doesn’t have a grate. It has tabs at the bottom. You put a paper cone on the tabs, charcoal on the cone and light the cone which burns and ignites the charcoal.  It also has slots on the side of the chimney that allow the cone to be lit if it is higher up. These don’t sound like major changes but read on. They give major advantages over the old system.

I received the unit and the only assembly required was attaching a handle to the chimney. It was a little finicky but anybody who can turn a screw with a screwdriver will be able to do it.

I started by trying the unit in a basic light. I was going to do a pork loin in my WSM Mini at 375 F. To get this temperature I light up a full chimney of coals.

Here is where the first advantage of the EZStart shows up. Normally, I put the chimney on a fireproof grill to light it up. The reason is that the newspaper creates ash that I don’t like messing my grill up with. With the cone system, you can put the chimney on the grill you will be using it on.

It took about 20 minutes for the coals to white over. Here is where the second advantage of the EZStart system shows.

With a standard chimney, you have to pour the coals onto the grill. This involves manipulating a blazing hot chimney full of burning coals. Often, some spill or bounce out of the grill.

With the EZStart, the cone that held up the cones has burnt away and you can just lift the chimney leaving the coals behind. It seems way safer and is definitely easier.

In case you were wondering, the pork loin was delicious! 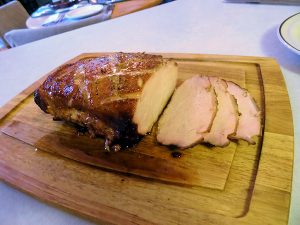 I wanted to try something that uses the third advantage of the EZStart. The slots down the side let you fill the chimney part way, put the cone on top of the charcoal and add more on top. When you light the cone through the slots, it only ignites the charcoal above it. This means you will have some charcoal burning among unlit coals. This gives a lower temperature and the coals will burn for a longer time as they slowly ignite the coals around them. Perfect for a low and slow smoke in a charcoal smoker.

I put the chimney on the grill of my smoker and filled it 2/3 full. I put a paper cone on top of the charcoal. I put 12 or 15 briquettes on the cone.

I lit the cone and let it burn for 10 to 12 minutes. You are not looking for all the coals to be whited over. You are looking for a good burn of coals above the cone.

I lifted the chimney and let the charcoal fall onto the grill. You will note that not all the charcoal is burning.

I put the rest of the smoker on the grill. When it got to my desired temperature, 230 F. I closed the damper vents down to 1/2 closed on the top and just open on the bottom.

I was able to keep the temperature at 230 for over six hours and there were still coals burning when I shut it down. I did not have to add more coals and it took little management of the dampers.

By the way, I was cooking some beef ribs that were great! 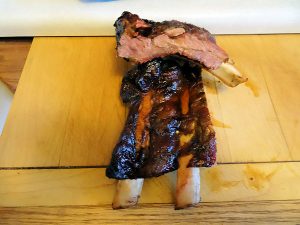 This is a great product. Using it just as a regular chimney is safer and cleaner than the standard chimney. You aren’t pouring hot coals and there is no paper ash blowing around. It is worth it just for this.

However, as a smoker, it is the bomb for low and slow smoking in a charcoal smoker. The moveable cone allows you to light just a few briquettes and have a good long controlled smoke.

There is one disadvantage. You have to buy the cones. However, they are only a few cents each. Order a bunch and you are good to go.

I do recommend this product and will continue to use it.

Here is a video I did of my use of the product.