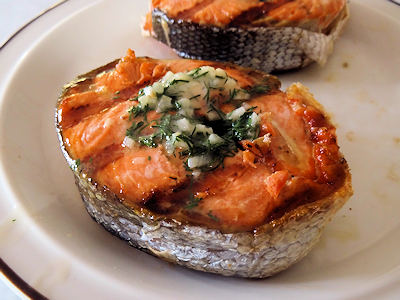 She Who Must Be Obeyed loves salmon. I do too but I find it very expensive. Apparently I am wrong and we can afford it. I stand corrected.

We purchased two salmon steaks and I was charged with preparing it. I love dill and garlic on my salmon so I made Dilled Salmon Steaks.

I started by carefully working a very sharp knife between the bones on the thin pieces of the steak and the meat. Then I cut these bones from the spine with kitchen shears.

I carefully worked the knife between the skin and meat on one of the thing pieces an cut the skin off.

I curled the skinned thin piece into the bulk of the salmon and wrapped the other thing piece around it. I tied the steak with butcher string to make a nice disc shape.

I preheated my Louisiana Grills smoker to 210 F and put the salmon in to smoke for 40 minutes. If you don’t have a smoker, you can grill the steaks on your barbecue or cook it in a 350 F oven for about 40 minutes.

While the salmon is cooking, I mixed the butter, garlic, dill and lemon juice with a fork. I formed it into two discs and put it in the fridge to chill.

When the salmon had reached an internal temperature of 140 F (about 30 minutes), I took it inside. I used a clean pair of needle nose pliers and grasped the spinal bone and wiggled until it pulled out taking the remaining bones with it.

I put a disc of butter on top of each steak and put it back in the smoker for few minutes to get the butter soft.

I brought the steaks in and cut the string off. I served them with grilled potatoes and coleslaw.

She Who Must Be Obeyed was happy which means I was happy. The salmon had a nice hint of smoke, the butter gave a good kick of dill and garlic. I think you will like this.