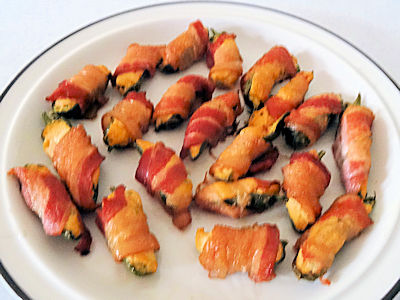 ABT stands for Atomic Buffalo Treats or something to that effect. Some have a more coarse word for the Treat part. It is base on cream cheese stuffed jalapeño peppers wrapped in bacon and smoked. I had been invited to a pot luck dinner and asked to bring an appetizer. I decided to do ABT’s but throw a curve into them.

I really like the sweet/spicy taste of Italian sausage and thought it would go great with cream cheese and salty bacon.

I took two Italian sausages out of their casing and browned them over medium heat in a frying pan. I removed it from the heat to cool.

I cut eight jalapeño peppers in half and scraped out the membranes while the meat was cooling.

I softened the cream cheese with a fork and mixed in the cooked sausage.

I stuffed the mixture into the jalapeño halves and wrapped each in 1/2 strip of bacon. I put them in a 250 F smoker for 1 1/2 hours, until the bacon was cooked and had a nice colour. You could also cook these on a tray in a 300 F oven for 1 hour.

These were as good as I thought they would be. The Italian sausage and cheese made a sweet/spicy/creamy filling. The heat of the peppers gets milder when cooked and the salty bacon set it all off. I only made one mistake. I should have made more.