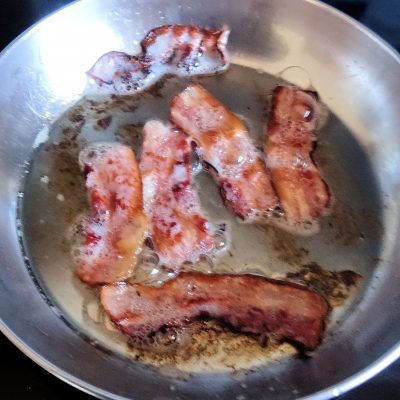 BACON! Who doesn’t love bacon? On a recent trip to Montana for a bonspiel, I found a whole side pork in Costco. Whole pieces of side pork are very rare here so I picked it up to make some home made bacon.

I decided to three different kinds of bacon: regular, maple and molasses. I will do a post for each so they don’t get confused. This post is on the regular bacon

The side pork had already had the skin removed so I only had to cut any loose pieces and cut the slab into 3 smaller pieces.

To make dry cured bacon you need to understand the process of curing. You make a mixture of salt, curing salt and a sweetener.

The salt pulls the moisture out of the meat.

The curing salt is a mixture of salt and sodium nitrite that gives the bacon its cured flavour and red colour. It also inhibits bacterial growth. Bacon is cooked at low temperatures and cured for a long period of time. Without the curing salts, the meat may spoil. The curing salt usually used is called Prague Powder #1, Instacure #1 or many other names. Whatever it is called, you are looking for a product that is 93.75% salt and 6.25% sodium nitrite.

The sweetener adds a nice touch of sweet to offset the saltiness of the bacon.

For regular bacon, you use the following per pound of pork you are curing:

Alternatively, you use the following per kilogram:

The piece of side pork I was using for the regular bacon weighed 1.5 kg (3.3 pounds). So I used the following:

I mixed these together. Then I put the pork on a large plate and rubbed the mixture all over the surface of the pork. The I put the pork in a 1 gallon resealable bag. I made sure any leftover mixture was scraped into the bag.

I put the bacon in the fridge and let it rest in the bag for 8 days, turning it and rubbing the cure in every day or two.

I took the bacon out and rinsed it well under running water. I put it in the fridge, uncovered overnight. It is important that the surface of the bacon is totally dry before smoking to get a good even smoke. If the surface is wet, bad smoke flavours can form on the surface.

The bacon should be quite dry coming out of the fridge. If it isn’t, dry it with a paper towel and let it sit on the counter until dry. You can use a fan to speed this up.

I like to double smoke my bacon. So, I fired up my A-Maze-N Pellet Smoker and put it in my smoker. I didn’t turn the smoker on, I just put the bacon in with the pellet smoker and let it smoke for 8 hours. You can skip this step if you like a lighter smoke on your bacon.

After this cold smoke, I put the bacon in the fridge overnight.

I preheated my smoker to 180 F and smoked the bacon to an internal temperature of 130 F.

If you don’t have a smoker, you can put the bacon on a rack over a tray in your oven at 180 F and cook to an internal temperature of 180 F. This will give you a non-smoked bacon similar to some made in Europe.

I put the bacon in the fridge for a day then sliced it up and gave it a try.

If you really want to see the difference between home made bacon and commercial bacon, cook a slice of each at the same time. You will see the water boiling out of the commercial bacon while the home made just nicely cooks to a golden brown. So nice!

4 thoughts on “Home-Made Bacon, The First of Three!”