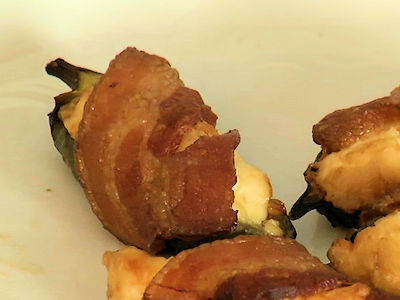 I felt like a great appetizer. One with bacon and jalapeño peppers. However, I wanted She Who Must Be Obeyed to enjoy it as well. A sure way to get her to like it is to introduce shrimp. So, I made Coffin Shrimp.

First, let me apologize for the lack of pictures. The local cable channel, ShawTV, asked me to do some cooking videos. This is one of the projects I made for them and it isn’t up on YouTube yet. When it is, I will link to the video.

To make Coffin Shrimp, I cut jalapeño peppers in half. I scooped out the membrane and seeds. These parts are where most of the heat is. You can leave them in if you want a really hot appetizer.

I put some Seafood Sauce (some call it Cocktail Sauce) in the bottom of each pepper half. I cut a shrimp in half and put both halves in the pepper. I covered the shrimp with cream cheese. I covered the cheese with 1/3 of a slice of bacon.

These are a terrific appetizer! The creamy cheese balances the salty bacon. The sweet shrimp and seafood sauce balance the pepper. You will be surprised how mild the heat is. The peppers are much milder when cooked. I am pleased to report, She Who Must Be Obeyed was impressed!

My local community TV channel, ShawTV has allowed me to do a cooking show and this recipe is one of three dishes I make in the first episode.