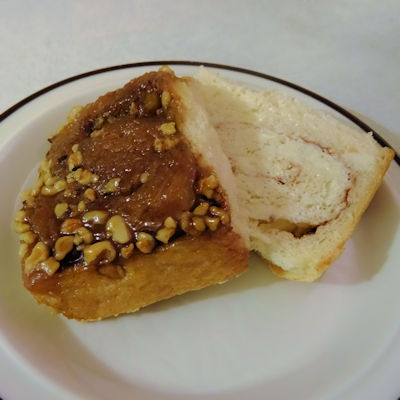 You may have noticed I haven’t posted for a while. I have been sick with a terrible cold. I am getting over it and decided I needed a treat. So, I made Caramel Apple Rolls.

I started by mixing 2 cups flour, 2 packets of yeast, 1/3 cup sugar and 1 teaspoon salt together.

I put the butter in the water and heated it to 120 F in the microwave. The butter won’t be totally melted but that is not a problem.

Add 2 1/2 cups flour and change to the dough hook. Mix with the dough hook for 2 minutes, scrape the bowl and mix for 8 minutes more.

Turn the dough out onto a floured counter. Need 3 or 4 times until the surface isn’t sticky. Form the dough into a disc and cover with a dry towel. Let it rest for 10 minutes.

Mix 1/2 cup butter, 1 cup brown sugar and 1/4 cup light corn syrup in a small saucepan over medium heat. Stir until the mixture comes to a boil. Boil for 30 seconds. Divide the syrup between two eight by eight cake pans that have been sprayed with baking spray. Divide 1/2 cup of chopped walnuts between the two cake pans.

Press and stretch the dough to a 10 by 15 inch rectangle on a floured surface. Spread 3 tablespoons of soft butter over the dough. Mix 1/3 cup of sugar and 1 teaspoon of cinnamon together. Sprinkle the mixture over the rectangle. Spread a medium apple that has been peeled, cored and chopped over the rectangle.

Roll the rectangle along the long edge and seal the seam. Cut the cylinder into 12 equal slices with a sharp knife. If the knife starts to stick, run it under warm water before the next slice.

Cover the pans with a dry towel and let the dough rise in a warm place until doubled in size, about 1 hour.

Cook the buns in a 350 F oven for 30 to 35 minutes or until the roll are golden and the internal temperature measures over 200 F.

Let the pans cool for 5 minutes. Run a knife around the edge of the pan. Turn the pans over on a plate and lift the pans off. 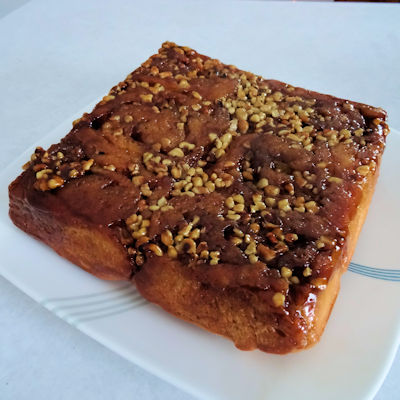 If you would like to see a video of this cook, here it is!

These have a wonderful caramel topping, the bread is soft and spongy and the apples give it a tart sweetness. They really raised my spirits despite the cold!