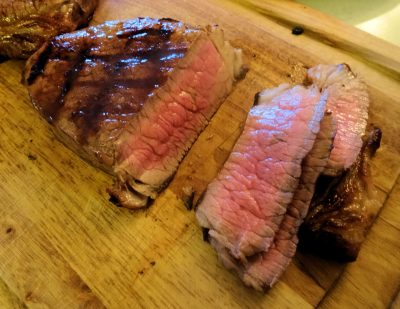 I do find that a marinade can take a piece of meat to the next level. I have never felt that a marinade delivers on tenderizing meat but I do find it can add a whole new layer of complexity.

There are difficulties with marinating meat. First, you have to let is sit for long periods of time to get the flavour into the meat. Even then, it only gets a little into the surface of the meat unless you go for days.

Second, to try and get the flavour to me noted in the interior of the meat, you need to use a very strongly flavoured marinade that can overpower the taste of the meat. If you use a milder marinade, it just doesn’t add flavour to the centre of the meat.

Cajun Injector makes a line of marinades that is meant to be injected in the meat with a syringe injector. I picked some up and gave it a try on a couple of pieces of eye of the round steak.

I chose the eye of the round because it is not the tenderest of cuts and is not the most flavourful piece of beef.

I injected the steaks with 15 ml of the marinade each. Injecting a steak can be fun. The liquid does leak out in several places but I persevered. They instruct you to rub any liquid that came out on the surface. 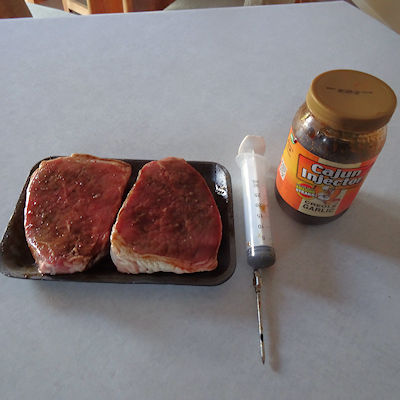 I cooked the steaks on my Weber Genesis Grill in my normal way.

I really like this marinade. It is a little finicky to inject in a steak but I have tried it in a brisket point and it is a lot easier in a larger cut of meat. There is a nice flavour all the way through the meat and I injected it 15 minutes before cooking.

The marinade did not significantly tenderize the meat which I didn’t expect.

The flavour was perfect. It gave the meat a layer of spiciness and a touch of tart without detracting from the beef flavour. I really enjoyed it.