This summer was colder than usual here in the mountains. As a result, my jalapeño peppers were quite small. What to do, what to do? It hit me. I decided to stuff shrimp into my shrimpy peppers and make Shrimpy ABT’s. Don’t try and say the last sentence four times fast.

For those of you who don’t know what ABT’s stand for or what they are, ABT stands for Atomic Buffalo “Treats” or words to that effect. The basic ABT is a pepper stuffed with cream cheese, wrapped in bacon and the smoked, grilled or baked.

I started by draining and rinsing a can of cocktail shrimp. I chopped enough of them to make a finely minced 75 ml (1/3 cup) of shrimp.

I sliced 10 of the shrimpy jalapenos in half and removed the seeds and membranes. I stuffed them with the shrimp mixture.

I wrapped each pepper in 1/3 of a strip of bacon.

I put the ABT’s in the Louisiana Grills Pellet Smoker for 1 1/2 hours at 230 F. You could also bake them in an oven or over indirect heat in a grill.

Here are the finished ABT’s. 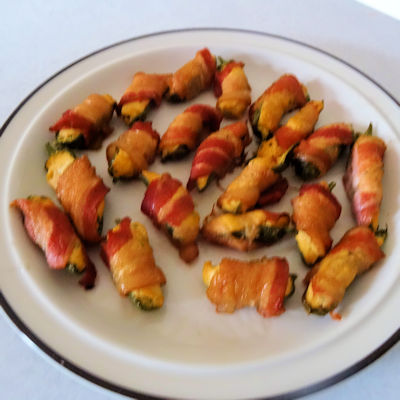 I love the texture the shrimp gave the filling. Still creamy but a bit more set up. The taste was great. The shrimp gave a nice salty balance to the cream cheese. The slight horseradish hit from the cocktail sauce gave a little different heat than the jalapenos. As usual, my guests were surprised that the jalapenos weren’t that hot with the seed and membranes removed and with the cooling effect of the cheese.

Everyone raved but the real complement was the speed they disappeared. Of course, they were shrimpy.