We have all read the traditional wisdom that you need to cook a steak by putting on high heat to seal in the juices. As is all too often the case, this traditional wisdom is just wrong. There have been controlled scientific studies that have proved it to be flat out wrong. The heat you cook beef at has nothing to do with the moisture retained by the beef.

As is also true of these old beliefs, they are based on some correct facts. We like steaks that have a sear on the surface. The seared surface adds a nice flavour and makes the steak appear better to our eye. Would you want to eat a grey steak with no sear?

So, you don’t need to cook a steak over high heat to retain moisture but you do want some sear. Some brilliant smokers have used this information and developed a method called reverse sear. This involves cooking a steak over low heat to close to the level you want it cooked and then finishing it over high heat to give it a sear for flavour and appearance.

Why? If you like the taste of smoked food, you can cook a steak low and slow with smoke and then finish it with a sear. This adds a nice kiss of smoke to the flavour of your steak.

Here is how I do it on my Louisiana Grills Smoker. You can also do it with your smoker and a gas grill. You would smoke it and then sear it on the grill.

I preheated my smoker to 210 F and put a nice piece of top sirloin seasoned with steak spice on the top rack.

I smoked it until the internal temperature was 120 F. This is really rare but the steak was going to cook more as I brought the fire up in the burn chamber and as I sear it.

I pulled the plate back that covered the burn chamber. Make sure you have a good fire proof glove, this is a hot procedure! Then I put the rack back over the burn box and turned the pellet smoker up to 450. I left the lid up and waited until the flames were really burning in the burn box.

I put the steak directly over the burn box and cooked it until there were nice char marks. I rotated it ninety degrees to get a diamond pattern. I flipped it and marked the other side. 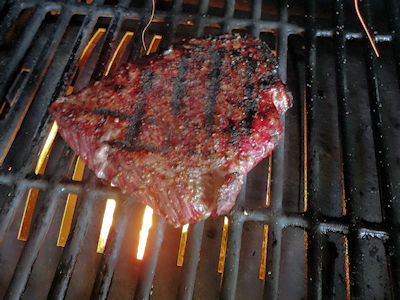 The internal temperature of the steak was 145 F or medium well when we were done. This is just the way She Who Must Be Obeyed likes it. If you want your steak rarer, stop smoking at a lower temperature.

I let it sit a few minutes before slicing it up and serving it.

We served it with smashed potatoes and coleslaw. 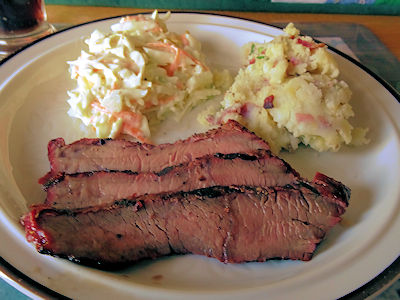 This definitely added a touch of smoke flavour. We really enjoyed it. The steak was nice, tender and juicy and did not suffer from not being immediately seared.

We will do this again even though it is a bit more work.