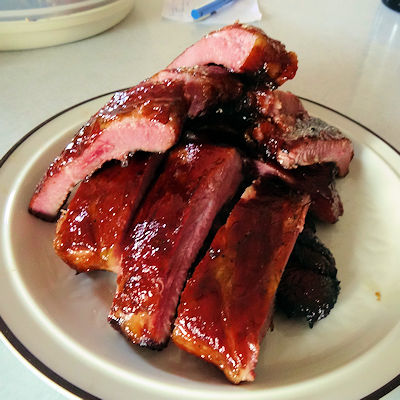 I have made Bacon on a Stick in a previous post. They are spareribs that have been cured like bacon and then smoked. I had friends visiting from Montana and I wanted to make something a little out of the ordinary barbecue for them. So I made bacon on a stick with a different seasoning blend and Montana Bacon on a Stick was born.

When you cure meat you must be careful with your measures. What cures meat is a blend of salt and sodium nitrite. This blend is called many things, Instacure 1, Prague Powder 1, Pink Salt. They are all the same, just make sure there is 6,25% sodium nitrite and the rest is salt.

It is the sodium nitrite that gives bacon and ham the pink colour. It also allows you to do long slow smokes at low temperature. It inhibits bacteria growth so the meat doesn’t spoil in the long smoking process.

However, too much sodium nitrite is bad for you so you must be careful to use just the right amount.

You will be adding the other ingredients based on this weight.

For each kilogram of water and ribs, add:

If you aren’t into the metric system, add the following to each pound of ribs and water:

I had 3 kilograms of meat and water so I tripled the amounts from the metric list.

I took the ribs out, added the curing ingredients and stirred to dissolve. I put the ribs back in and put a plate on top to keep the ribs submerged.

Refrigerate the container for 3 days and stir the ribs around a couple of times.

I preheated my Louisiana Grills smoker to 210 F with hickory pellets. You can do this in an oven and they will be very good but they are really a lot better with the smoke flavour.

I rubbed the ribs with a barbecue rub (I used Louisiana Grills Bourbon Molasses Rub) and then smoked them to an internal temperature of 195 F which took six hours. If your ribs are thinner or thicker you may have a different length of cooking time.

I brushed them with a mixture of 1/2 barbecue sauce and 1/2 maple syrup and smoked for another 30 minutes.

These are a favourite of mine. The nicely marbled pork on spareribs takes the cure like a something between ham and bacon. The seasonings gave the pork a richer flavour and the sweet from the maple syrup gave a nice glaze. This is a keeper.

3 thoughts on “Montana Bacon on a Stick”