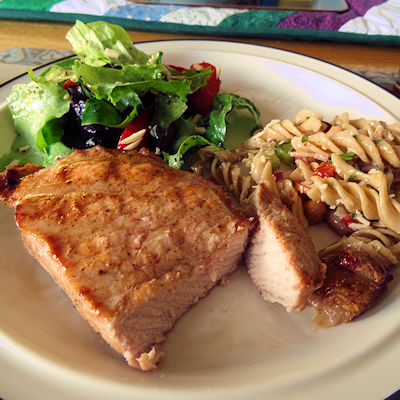 Traditional wisdom says you should fire up your grill to very hot when cooking a pork chop. The theory is that the high heat sears the meat and “seals” the moisture in. This is another case where traditional wisdom is neither wise nor correct.

Several studies have shown that searing the meat does not keep any moisture in the meat. The most important factor in keeping meat moist is the temperature the meat gets to. The more well done the meat, the more moisture is cooked out.

It has been my experience that you get moister chops if you cook them over a medium flame to just the temperature that gives you the level of doneness you like. In my case, I want very little if any pink. I cook the chop to an internal temperature of 155 F. If you like a bit more pink you can go as low as 145 F according to the USDA for a pork chop. This would be even moisture.

If searing doesn’t seal in the meat, why not cook it over a very low flame? The answer isn’t moistness, it is taste. Our taste buds have become used to that nice flavour from browned meat. Cook it too low and it will be moist but it won’t be browned and you will have less flavour.

So, I sprinkled a nice barbecue rub on my pork chops and preheated my Weber Genesis Grill and adjusted the grill flame to just above medium.

I put the pork chop on and cooked it for 5 minutes on one side. My pork chops were 3/4 inch thick. You will want to cook it for less on the first size if they are thinner.

We served it with a fresh green salad from the garden and a pasta salad.

Try turning the heat down on your grill. These pork chops were nice and juicy despite being lean and cooked to no pink. They still had a nice golden colour and looked and tasted great.