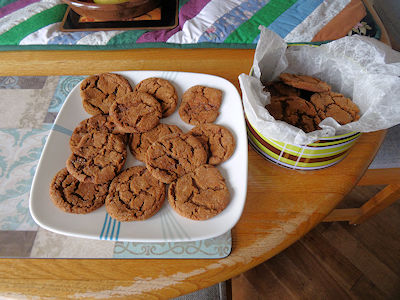 I was going to a Toastmaster Meeting and it was my turn to bring a snack. I had been looking around the Crosby’s Molasses site and it got me thinking of the gingersnaps I used to have as a child. I was doomed. I had to have gingersnaps.

I had seen a recipe for gingersnaps some time ago that I had wanted to try and went for it. Here is the link to the recipe.

I followed the recipe pretty closely.

I mixed the dry ingredients together. Then creamed the shortening with the eggs and molasses.

I added the dry ingredients in thirds.

I rolled the dough into balls and rolled in cinnamon sugar. The recipe didn’t tell you what ratio of cinnamon sugar to use. I mixed  2 ml (1/3 teaspoon) cinnamon into 1/3 cup white sugar.

I put the coated balls on an ungreased baking sheet, 2 inches apart.

The recipe says to cook for 10 minutes but I got a better result with 11 minutes.

After taking them out, I found the cookies were easier to handle if I let them cool on the cookie sheet for 5 minutes. 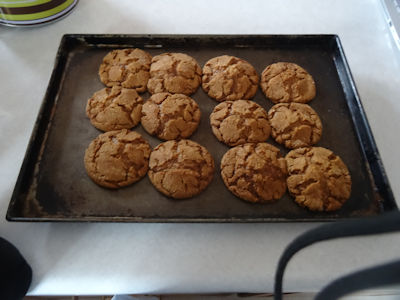 These are absolutely marvelous. They have just the right blend of a crispy exterior and soft centre. There is a nice rich molasses sweetness with the spiciness of the ginger and cinnamon. I love these cookies! The way they disappeared at the meeting it seems many others do too!