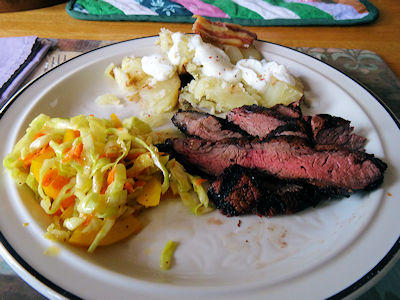 This post is not a recipe. It an example of how I make a meal. It is about as basic as you can get. I cooked a steak and baked potato on my Louisiana Grills Pellet smoker and used one if its best features, the direct flame grill.

I started by taking the left hand grate out of my pellet smoker and then preheating it to 350 F.

Of course, you have to do more than just heat up potatoes, they need more flavour. So I made five or six slices almost all the way through two baking potatoes. I took thin slices of onion and pushed it into the slices.

I took a half strip of bacon and put it on each potato and then wrapped them in foil.

I put them in the smoker. Note the left grate not being installed. 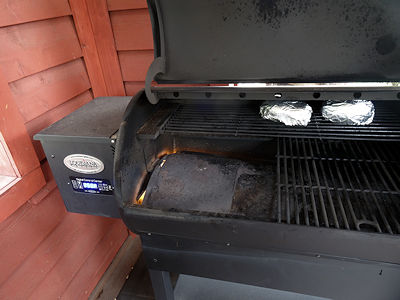 I let them cook for 45 minutes.

Then I slid back the cover from the direct flame grill and put the left grate in. I turned the temperature up to 450 F.

While the temperature was increasing, I gave both sides of two nice pieces of Fillet Mignon a generous coating of Louisiana Grills Chop House Steak Rub. 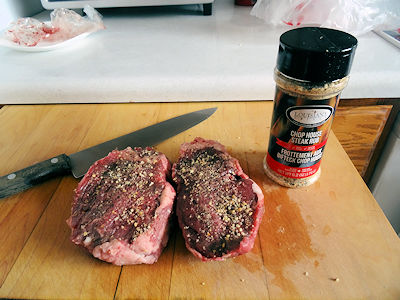 When the grill was up to temperature, I put the steaks directly over the flame. I gave it 30 seconds and then rotated it ninety degrees to get a good cross hatch and let the steak sit for 30 seconds. I repeated this with the other side of the steaks. Then I moved them to the main part of the grill.

I cooked them to an internal temperature of 135 F which is medium rare, the rarest She Who Must Be Obeyed eats her steak. That took about 6 minutes a side but the time will change with the thickness of the steaks. Go to 125 F for rare or 150 F for well done.

I took the steaks and potatoes inside and let the steaks sit for five minutes. 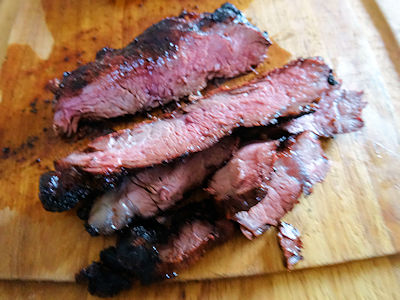 We served the steak and potatoes with deli style coleslaw.

The potatoes were perfectly cooked with a touch more taste from the onion. The slice of bacon goes well with them. The pellet smoker makes a great steak with a nice sear but as it is done so quickly, most of the steak was medium rare, just the way I like it.