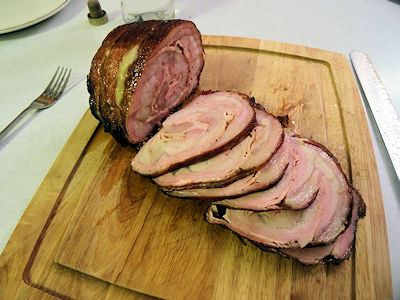 It was my birthday recently. At my age, you don’t want to admit you have a birthday let alone celebrate it. However, if it is an excuse to make something great and to get She Who Must Be Obeyed to exercise her culinary chops, you bite the bullet and admit it is your birthday.

I took the opportunity to try something I have been thinking about on my Louisiana Grills Pellet Smoker.  I made a Smoked Three Pig Cordon Bleu, The three pigs are a pork loin, ham and bacon. Stuffing a pork loin with Swiss cheese and ham make it cordon bleu.

I put the roast in the pellet smoker preheated to 210 F for about 2 hours until the internal temperature was about 120 F. The lower temperature and slower cooking time allowed for more smoke exposure to the roast.

I took the roast out of the smoker, put it on a cutting board and tented it with foil to rest for 10 minutes.

We sliced it up and served it with She Who Must Be Obeyed’s Macaroni and Cheese plus her great spinach salad. 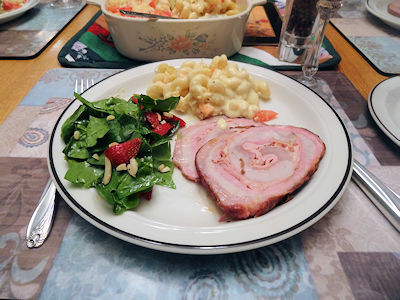 This was a great way to celebrate my birthday, The pork roast had a great sweetness from the seasoning mix, salty from the bacon and the ham and was very pretty. This will become a special occasion meal.