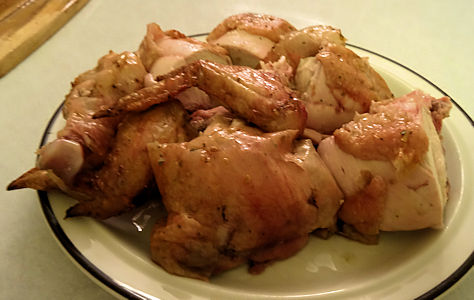 There was a great sale on small chickens at the local supermarket. I had yet to make beer butt chicken on the Louisiana Grills Pellet Smoker. Also, I had some Louisiana Grills Chicken Seasoning I wanted to try. It seems fate was saying it was time.

Most people use beer when making beer butt chicken. Surprise! I find i get a better result with ginger ale. I am sure the fact that ginger ale is less expensive than beer has no effect on my decision and the cheque is in the mail. Whatever, I guess I am making Ginger Butt Chicken instead of beer butt.

I started by rinsing the chicken under cold water and patting it dry with a paper towel. Then I carefully worked my finger under the skin over the breast and rubbed oil between the skin and the meat. I rubbed the breast side of the bird with oil and flipped it over.

Then I worked my finger on the skin over the thighs down to the drumsticks. I rubbed some oil between the skin and the meat and then over the whole carcass.

I rubbed some of the chicken seasonings all over the birds and under the loosened skin.

I filled a pop can 1/2 full of ginger ale and put it in my chicken roasting stand. Then I put the stand in the cavity of the bird. If you do not have a roasting stand, you can put the open end of the can into the large cavity and use the drumsticks like a tripod to prop the chicken up.

I had the Louisiana Grills smoker preheated to 350 F. I put the chicken on the grill and smoked for about 1 hour. If you do not have a smoker get one. You could cook it in a 350 F oven but it is better in the smoker.

I roasted it for about an hour and made sure the meat in the breast and thighs both had an internal temperature over 165 F.

Be very careful taking the chicken off the grill and removing the can. You are dealing with very hot liquids. I took the chicken inside and carefully lifted it off the roaster.

I cut it up into serving size pieces. We served it with diced new potatoes and green salad. 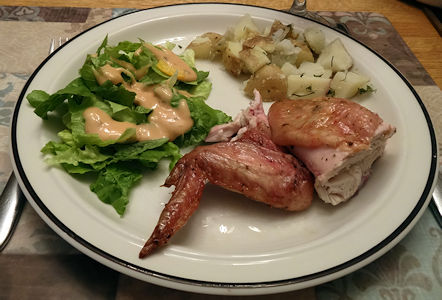 The reason chicken cooked this way is so good is that the hot air crisps the skin while the steam from the can keeps it moist. I find the pellet smoker seems to crisp the skin even better than an oven or a barbecue. I think it is the fact that a fan forces air into the chamber and it acts like a convection oven.

Whatever it is, the skin was golden and crispy. The meat was moist and tender. The seasoning was very good. It is not a spicy barbecue rub but a mixture of seasonings that really compliment the chicken. I will be using this seasoning mix on poultry even when I am not cooking it on the pellet smoker. The mix is tasty but doesn’t overpower the chicken.