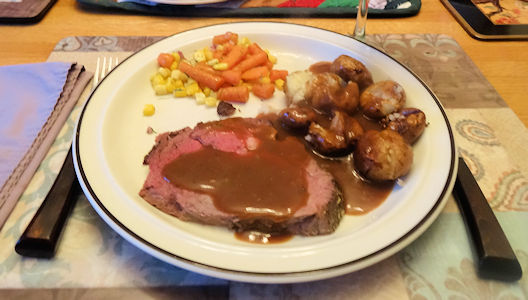 A sirloin tip isn’t a particularly tender cut of beef. Also, the sale price suggested to me it wasn’t the highest grade but, hey, take what you can get. I decided to roast it instead of braise it and just chew a little more.

I started by rubbing the two pound roast with some vegetable oil and rubbing some herbs de provence over the roast.

I put it in a 400 F oven and cooked it to an internal temperature of 130 F. It took about an hour. I turned the potatoes twice during the cooking.

I put the roast on the carving board and tented it with foil. I took the potatoes out of the pan and kept them warm.

I put 1/4 cup of butter in the pan over medium heat. When it melted, I stirred in 1/4 cup of flour. I cooked the flour and butter for a couple of minutes. I added a can of condensed beef broth, 1/2 can water and 2 tablespoons soy sauce. I stirred and cooked until the gravy thickened. I tasted and added salt and pepper to taste.

I sliced the beef quit thin. 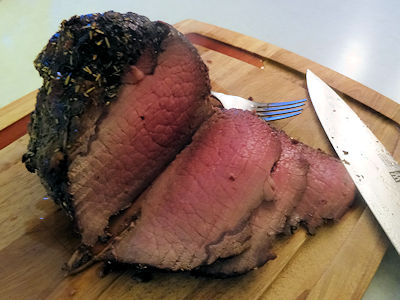 We served the beef and potatoes with steamed vegetables.

There is no doubt that the roast was not as tender as a nice prime rib. However, it had a good taste and was not too tough. The gravy and potatoes were great. The hot roast beef sandwiches the next day were very nice, too!