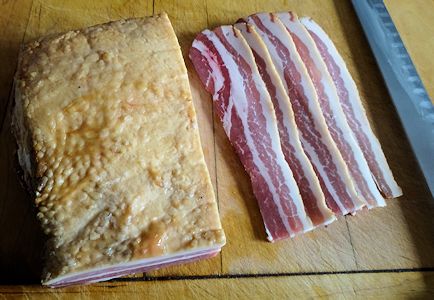 I had made bacon in a prior post. However, I wanted to try it in my new Louisiana Grills Pellet Smoker. The problem is that pork bellies are hard to come by here in the Canadian Rockies.

Fortunately, I went on a trip to Edmonton and an Asian market had pork belly pieces on sale. I took the opportunity to buy three that were about 1 kilogram (2 pounds) each. I decided to take the opportunity to do three different variations on my original bacon.

If you don’t have a smoker, you can still make bacon. Many countries make unsmoked bacon and it is delicious in its own right. Instead of putting the bacon in a smoker at 180 F, just put it in a 180 F oven instead of the smoker.

I started by cutting the skin of the first belly piece. Just slowly work a sharp knife under the skin.

Then I weighed the pork belly.

The key ingredient for making bacon is a curing agent. This is necessary to prevent bacterial growth during the long slow smoking process. It also gives bacon its distinctive taste. However, it is critical not to use too much as a high level of curing agent can make you ill.

I use Morton’s Tenderquick as the curing agent for my bacon. You need to use 30 grams of Tenderquick for each kilogram of the piece of pork you are curing.  For those who are metrically challenged, you use 1/2 ounce by weight for each pound of pork.

If you don’t have a small scale, you can approximate with 25 ml of Tenderquick per kilogram of pork or 1 tablespoon per pound of pork. However, a scale is considerably more accurate.

Once you have measured out the amount of cure you need for each piece of meat, you need to calculate the amount of sweetener. You need 25 ml of sweetener per kilogram of meat or 1 tablespoon per pound of pork. The sweeteners you can use are brown sugar, maple syrup, honey or molasses.

For my first piece of pork, I chose brown sugar. The piece was close to 1 kilogram (2 pounds) so I used 25 ml (2 tablespoon) of brown sugar.

I mixed the sugar and cure together. I put the meat on a plate and rubbed the mixture onto all surfaces of the pork. I then put the pork into a large resealable bag and made sure that all of the cure mix gets put into the bag including any that fell of the pork. 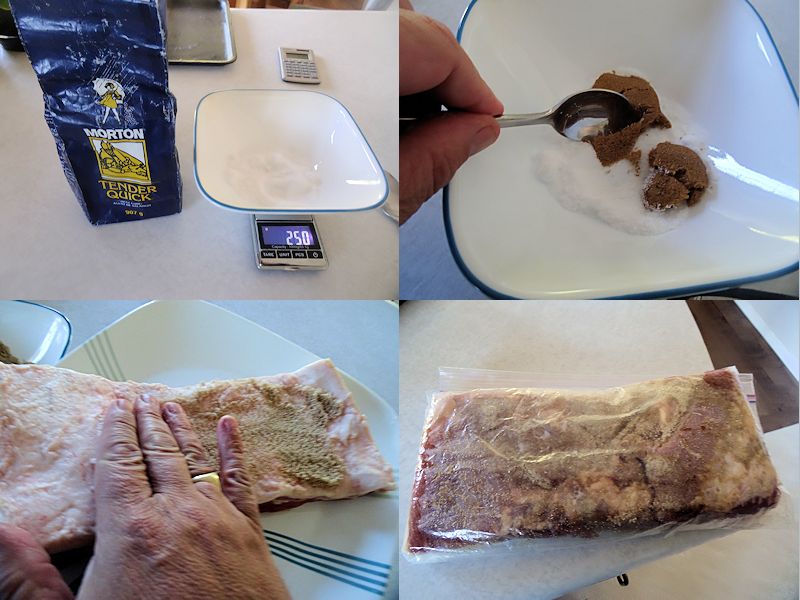 I did the same procedure for the second piece but used maple syrup instead of the brown sugar.

For the third piece, I used molasses instead of the brown sugar.

Once all the pieces were in their plastic bags, I put them in the fridge for 9 days, turning them every day. This allows the cure to penetrate the meat. 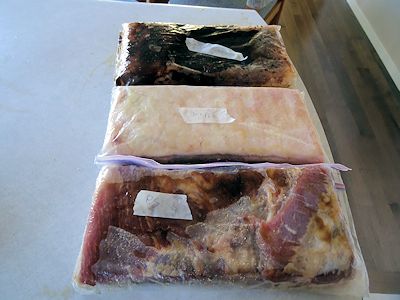 After the 9 days, I rinsed the pork off with cold water. Then I immersed it in cold water for 1 1/2 hours, changing the water twice. This takes the surface salt off. Dry the meat with a paper towel.

I put the pork in the fridge, uncovered, overnight to dry the surface. A dry surface takes smoke better.

I put hickory pellets in my A-MAZE-N Pellet Smoker. I put it in my pellet smoker which was turned off with the door propped open with a small piece of wood. I cold smoked the bacon for 5 hours.

Then, I took the meat out of the pellet smoker and turned it up to 180 F using hickory pellets. When it was up to temperature, I put the pork bellies back in the smoker.

I smoked them to an internal temperature of 130 F which took about 3 hours. I took the pork out and let it sit on the counter for an hour.

Then I wrapped it in plastic wrap and put it in the fridge for 2 days for the flavours to distribute through the meat.

I don’t have a meat slicer so I put the pork in the freezer for 1 1/2 hours to firm up which makes it easier to cut. Then I cut it with my ham slicer knife.

The ends are heavily smoked. I chop them up for uses in soups, stews, chili, etc. 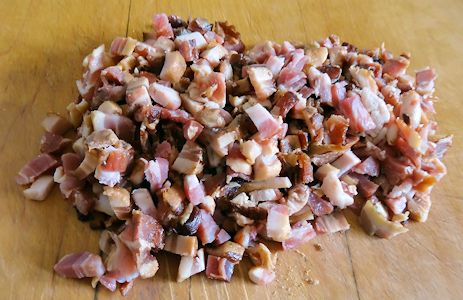 I fried up some of the trim pieces for a taste test. 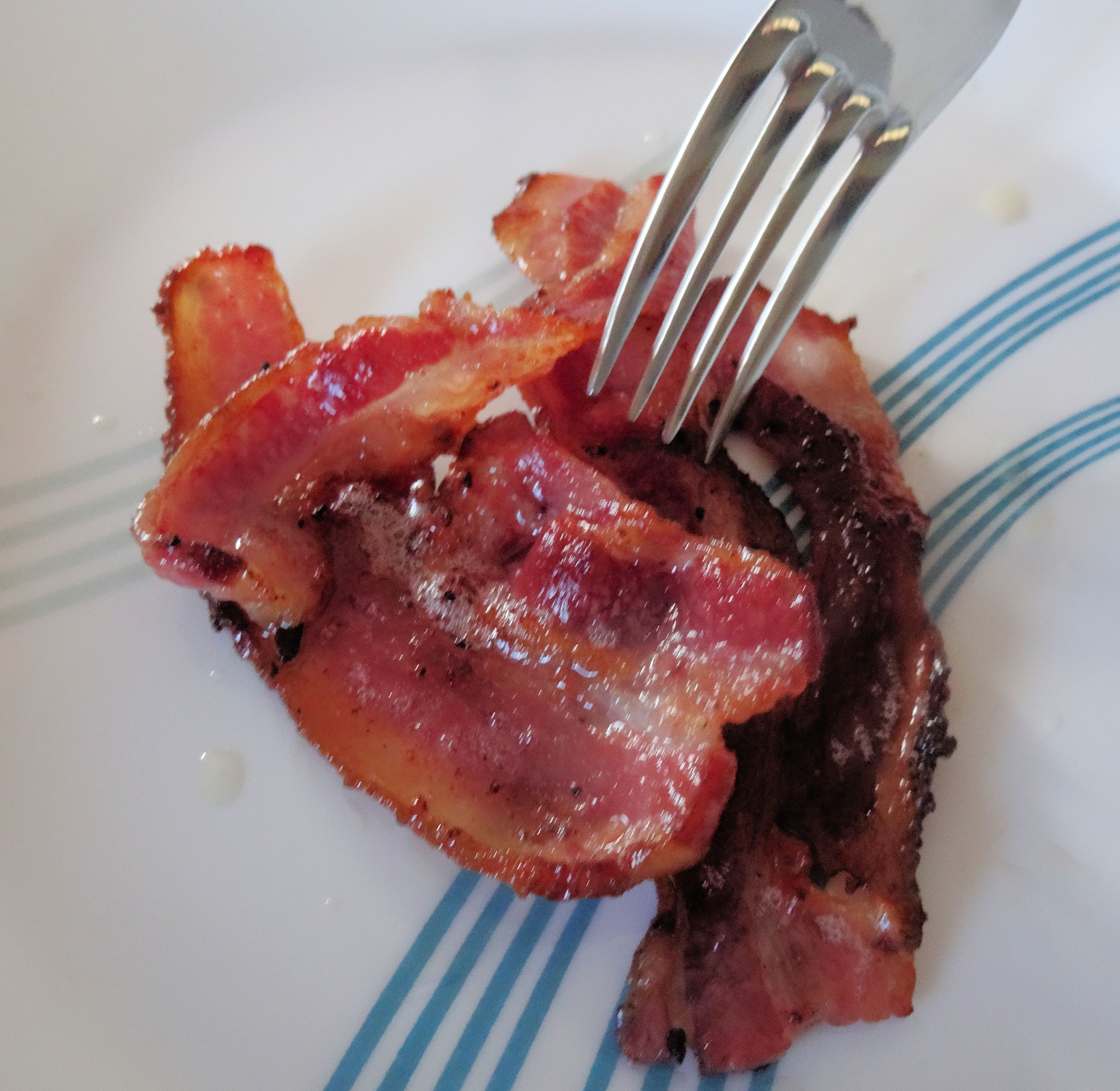 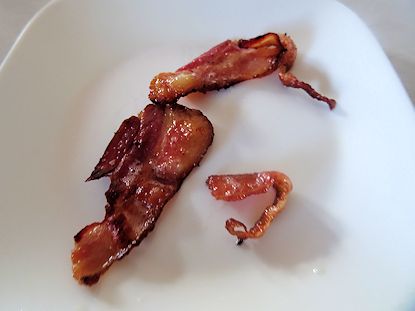 I asked She Who Must Be Obeyed and my friend, Bill, to help me with a taste test. The missus liked the molasses bacon best, Bill liked the brown sugar bacon first and I liked the maple syrup version best. Sigh.

The brown sugar bacon has a nice sweet/salt balance and is a tasty old standby.

The maple syrup bacon has a slightly different sweet profile. It isn’t strongly maple flavoured but it has pleasant maple hints.

The molasses bacon has a richer deeper sweet flavour and the bacon is slightly darker.

Aw, heck. They are all great.

As for my pellet smoker, it held heat perfectly and gave a good smoke exposure to the bacon.