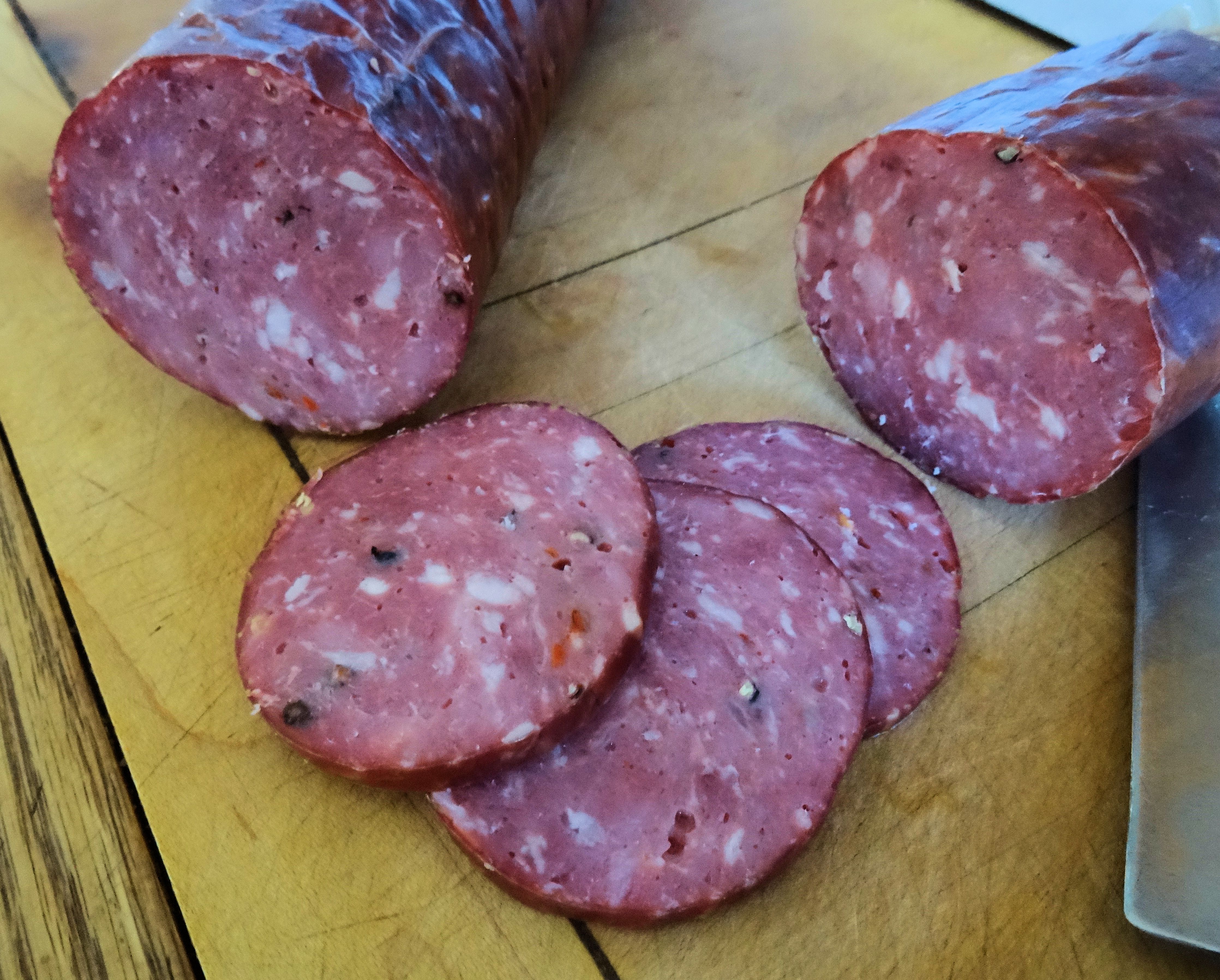 I used a commercial package of seasoning from Smokehouse Products. The spices are measured to be used with 5 pounds of meat.

I made sure the meat was cold. It is important to keep the meat cold throughout the process. It grinds better and gives a superior texture to your sausage. I cut the moose and pork up and ran it through my KitchenAid grinder attachment with a medium plate. I put it in the fridge to chill for 30 minutes.

The seasoning mix does not include a curing agent. I don’t like to do a long smoke without a curing agent. It helps prevent bacterial growth and gives that nice red colour to the sausage. I used Prague Powder #1 (also known as Instacure or several other names). The important thing to check is that it has 6.25 % sodium nitrite and the 93.75 % salt.

For 5 pounds of meat, you will need to add 1/4 ounce by weight curing agent. Do not use more or less. If you use less, you will not have enough to inhibit bacteria growth. If you use too much, it can make you ill.

I measured 1/4 ounce of curing agent on a small scale. If you don’t have a small scale, 1 teaspoon is an approximation. I mixed that into the seasonings from Smokehouse.

I spread the ground meat out on a baking tray and forced my finger tips into it to make a lot of indentation. I sprinkled the seasoning mixture over it and folded an edge of the meat into the centre and pressed it flat again. I did this until all the seasoning was moistened.

Then I pressed my fingertips into the meat and poured 1 cup of water over the meat. I mixed the meat for 4 minutes by folding it over, pressing it flat and rotating the pan. The meat should be a little sticky when you are done.

Put the meat in the refrigerator to chill for 30 minutes.

I put the meat in my LEM sausage stuffer with the largest filling tube. I used non edible fibrous casings that had been soaking in warm water. These come in various widths and lengths. They also allow smoke to permeate the sausage while cooking. I use two 3 inch casings that each hold about 2 1/2 pounds of processed meat.

I put the casings on the horn and filled them with sausage.

I tied off the open end. and put them in the fridge overnight.

This spice blend makes a very nice summer sausage. There is just a hint of heat offset by a nice sweetness. It is not too salty. I can recommend this seasoning whole heartedly.