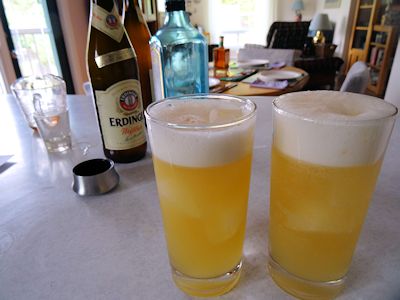 My best buddy, Bill, is a nice guy who has humoured me on my cocktail experimentation. However, he does come up with some different suggestions on his turn. He found this recipe on the Aviation American Gin site. It has two problems. One, the local liquor store in the Canadian Rockies didn’t have Aviation American Gin. Two, I hate cocktails with beer.

I substituted a good quality gin which solved the first problem.

As for the second problem, I was wrong and Bill was right (I hate it when that happens). It was delicious.

The recipe is at:

I started by making honey syrup. I mixed equal parts of honey and hot water and stirred until dissolved.

I put the gin, lemon juice and honey syrup in a shaker half filled with ice and shook it hard.

I strained into a collins glass and added 3 ice cubes.

I topped with wheat beer and garnished with lemon. 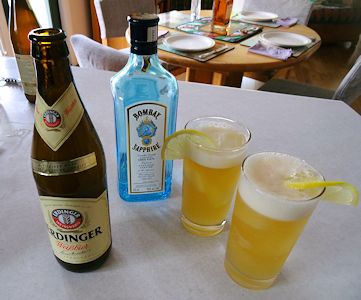 Not only was this better than I expected, it was one of the best sitting on the deck on a hot day drinks I have ever had. Try this and buy Aviation American Gin if you can. They deserve it for coming up with this great recipe.