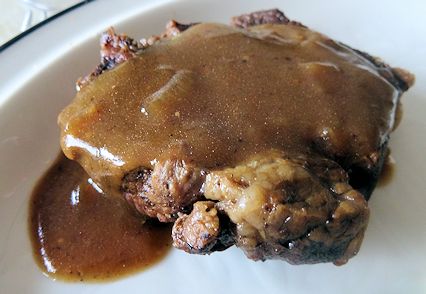 A great meal doesn’t have to be expensive or a lot of work. She Who Must Be Obeyed picked up a one kilogram (two pound) blade steak on sale. Simply braising it and using the liquid to make a great onion gravy makes a meal fit for a king (ouch, or a queen).

The recipe is at the end of this post.

I wiped all excess moisture off the steak so it would brown better and cut it into 4 portions.

I preheated 15 ml (1 tablespoon) of oil in a ten inch fry pan over medium high heat. When it just started to smoke, I added the steaks and seared until browned on both sides.

I added the beef broth and soy sauce to the onions. I scraped the brown bits off the bottom of the pan and brought the liquid to a boil.

I added the steaks back to the pan with any juices that accumulated.

Cover the pan and reduce the heat to simmer. Simmer for 1 1/2 hours.

Skim off as much fat as possible. Take the steaks out of the liquid, set aside and keep warm.

Increase heat to medium and bring the liquid to a slow boil.

Put the flour and cold water in a container with a tight lid. Shake until well mixed and there are no lumps. Add to the liquid slowly while stirring.

Cook until thickened. Reduce heat to low and simmer for a few minutes to cook out the flour taste. Taste and add pepper to taste. You likely won’t need to add salt as the soy sauce is quite salty.

Serve the steaks with the gravy.

She Who Must Be Obeyed made a delicious vegetable stir fry which was served over rice.

This tastes as good as any dish you’d order in a fine restaurant but has few ingredients, requires little preparation and is made from an inexpensive cut of beef. What more could you ask for? Well seconds, maybe.